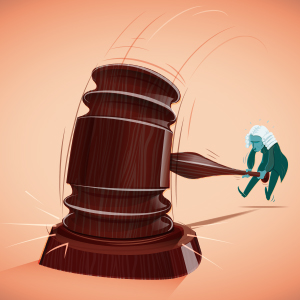 The Supreme Court of the United States (SCOTUS), established in 1789, is the highest court in the land and sets legal precedent for all lower courts, affecting decisions across the country. In the Court’s history, it has overturned approximately 236 of its own decisions, which works out to be less than two percent of its rulings overall. According to Court statistics, between 1946 and 2016 alone, the Court made more than 8,800 rulings.

One reason for the SCOTUS overturning so few of its decisions is a legal principle that the justices are bound to, known as stare decisis, a Latin phrase that literally means “Let the decision stand.” In a 1932 dissenting opinion, U.S. Supreme Court Justice Louis Brandeis wrote that following stare decisis is “not a universal, inexorable [unavoidable] command” but is “usually the wise policy, because in most matters it is more important that the applicable rule of law be settled than that it be settled right.”

Former New Jersey Public Advocate Ronald K. Chen, now a professor at Rutgers Law School, explains that for the Court, stare decisis is not so much a rule but a guideline.

“The Court usually tries to avoid overruling itself whenever reasonably possible, since our legal and social institutions depend upon the stability of the law in order to arrange their affairs,” Professor Chen says. “It is usually a good idea to be consistent in interpreting the law, since that consistency encourages stability, the ability to plan and rely on a known set of rules, and ultimately respect for legal institutions as above the fray of political discourse.”

Since it is only a principle, Professor Chen notes that there are times when SCOTUS decides that stare decisis does not apply. For example, the 1954 decision in Brown v. Board of Education ruled that segregation is unconstitutional. That decision overturned the Court’s 1896 decision in Plessy v. Ferguson, which ruled that “separate but equal” was constitutional.

The long and winding case

In May 2019, SCOTUS again overruled itself with its decision in Franchise Tax Board of California v. Hyatt, which deals with the immunity of states being sued in the court of another state. The Court’s decision in Hyatt overturned its ruling in the 1979 case of Nevada v. Hall.

Gilbert P. Hyatt, an 81-year-old inventor who has more than 70 patents to his name, brought the lawsuit. A patent that he filed for in 1968 was finally issued to him in 1990, earning him a lot of money.

In 1991, Hyatt moved to Nevada, which does not collect personal income tax. Suspecting a sham, the California Franchise Tax Board (FTB) began investigating Hyatt to prove his move to Nevada was really an attempt to dodge a $10 million-plus state tax bill. According to court documents, Hyatt claimed that the FTB sifted through his trash and contacted dozens of third parties in the fall of 1991 to confirm his residency in California.

Hyatt sued the FTB in Nevada state court in 1998, alleging, among other things, harassment, invasion of privacy, negligent misrepresentation, fraud and abuse of process. The FTB, however, pressed for dismissal, claiming immunity under the U.S. Constitution’s Full Faith and Credit Clause. That provision requires all states to respect each other’s laws and institutions.

Under the clause, the FTB asserted, Nevada must comply with California law that protects state tax collectors from lawsuits. But the Nevada Supreme Court rejected that argument, citing the 1979 U.S. Supreme Court ruling in Nevada v. Hall that decided states have no constitutional right to sovereign immunity from private lawsuits in out-of-state courts.

The FTB’s dispute with Hyatt eventually ended up before the U.S. Supreme Court three times. In 2003, the Court upheld the inventor’s right to sue the FTB. In delivering its ruling, the Court said it found no evidence of interstate “hostility” nor any extraordinary “burdens” to warrant granting California immunity from an out-of-state lawsuit.

“…the Constitution does not confer sovereign immunity on states in the courts of sister states,” Justice Sandra Day O’Connor wrote in the Court’s 2003 decision.

That ruling stood until May 2019 when SCOTUS—considering the Hyatt case for the third time—overturned precedent in a 5-4 vote, deciding that states may not be sued in other states’ courts. In reversing its earlier decisions, the Court determined its prior conclusions “misread the historical record.”

“Each state’s equal dignity and sovereignty under the Constitution implies certain constitutional limitations on the sovereignty of all of its sister states,” Justice Clarence Thomas wrote in his majority opinion. “One such limitation is the inability of one state to hale another into its courts without the latter’s consent.”

Professor Chen explains that the Court’s decision in Hyatt upholds the notion that every state maintains sovereignty and suggests that SCOTUS was uneasy with its decision in Nevada v. Hall.

That protection is a “historically rooted principle embedded in the text and structure of the Constitution,” according to Justice Thomas.

Justice Stephen G. Breyer disagreed. In his dissenting opinion, Justice Breyer argued that absolute immunity is not guaranteed by the Constitution: “No provision of the Constitution gives States absolute immunity in each other’s courts,” he wrote. “Compelling states to grant immunity to their sister states would risk interfering with sovereign rights that the Tenth Amendment leaves to the States.”

Besides the immunity argument, Justice Breyer also found fault with the ruling majority’s reasons for reversing Nevada v. Hall and expressed the fear that the ruling could endanger other precedent-setting decisions.

A 2018 Congressional Research Service report cites five factors that SCOTUS has historically considered when either affirming or overruling a prior ruling. Those factors are: the quality of the reasoning in the prior decision; workability, meaning if the ruling is too hard for lower courts to apply; inconsistency with related decisions, which could mean that the reasoning of the prior ruling has eroded over time by subsequent related Court decisions; changed understanding of relevant facts, meaning there has been a societal change that undermines the prior ruling; and the final factor is reliance, meaning even if the current Court thinks a prior ruling is flawed it may not overrule it if doing so would cause injury to individuals or organizations that have relied on it.

“It is one thing to overrule a case when it ‘defies practical workability’ … or when ‘facts have so changed, or come to be seen so differently, as to have robbed the old rule of significant application or justification,’” Justice Breyer wrote. “It is far more dangerous to overrule a decision only because five members of a later Court come to agree with earlier dissenters on a difficult legal question. The majority has surrendered to the temptation to overrule Hall even though it is a well-reasoned decision that has caused no serious practical problems in the four decades since we decided it. Today’s decision can only cause to wonder which cases the Court will overrule next.”

Justice Thomas addressed the issue of overruling Hall, writing, “We acknowledge that some plaintiffs, such as Hyatt, have relied on Hall by suing sovereign states. Because of our decision to overrule Hall, Hyatt unfortunately will suffer the loss of two decades of litigation expenses and a final judgment against the board for its egregious conduct.”

Professor Chen notes that if the Court changes its mind too often it can give the impression that the law is not stable.

“Deciding whether to apply stare decisis is a balancing act,” Professor Chen says, “and in particular the justices of the U.S. Supreme Court have learned to apply that process in a number of difficult situations.”