Gerrymandering Becomes a Problem for the States to Solve 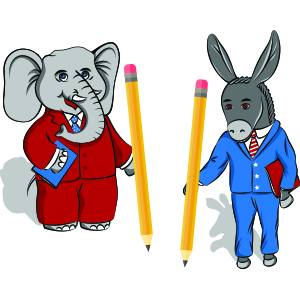 Gerrymandering on a partisan basis is not new to politics. The term gerrymander dates back to the 1800s when it was used to mock Massachusetts Governor Elbridge Gerry, who manipulated congressional lines in the state until the map of one district looked like a salamander.

Redistricting, which is the redrawing of district maps, happens every 10 years after the U.S. Census takes place. Whatever political party is in power at that time has the advantage since, in most states, they are in charge of drawing the maps.

“Partisan gerrymandering refers to the practice of politicians drawing voting districts for their own political advantage,” says Eugene D. Mazo, a professor at Rutgers Law School and an expert on election law and the voting process.

Professor Mazo explains that politicians, with the use of advanced computer technology, use methods of “packing” and “cracking” to move voters around to different state districts, giving the edge to one political party.

“Politicians can ‘pack’ like-minded voters into a single district, thus wasting the strength of their votes in other districts,” Professor Mazo says and gives an example of a district redrawn to include great numbers of Democrats, taking them away from neighboring districts, which would now be more likely to vote Republican. “Cracking” works by dividing voters in a single district into two or more districts.

“Say that 60 percent of voters in a given district are Republican,” says Professor Mazo. “Politicians can ‘crack’ that district to spread these Republican voters into two different districts.”

Again, “cracking” weakens the role of one party. The method in the above scenario would prevent a Republican from being elected, creating two new districts, each only 30 percent Republican. Professor Mazo says that partisan gerrymandering can lead to a minority of voters electing a majority of the legislature.

“It is important to note that Democrats and Republicans are equally at fault here,” Professor Mazo notes. “Both parties gerrymander to their own advantage when they can and have done so consistently throughout American history.”

There are two issues to be considered in gerrymandering cases, according to Professor Mazo.

“The first is whether partisan gerrymandering is a ‘justiciable’ issue for the courts, meaning whether this is a topic that courts could resolve in the first place,” he says. “The second issue is what test the courts should use to resolve gerrymandering claims.”

In 2004, the U.S. Supreme Court decided Vieth v. Jubelirer, an important gerrymandering case that arose out of a redistricting dispute in Pennsylvania. In a 5 to 4 decision, the Court found that gerrymandering disputes were justiciable. However, according to Professor Mazo, the Court could not agree on what test or rule should be used to resolve these disputes. Despite the fact that federal courts heard many gerrymandering cases, judges received no guidance from the highest court in the land on how best to resolve them.

Scholars have discussed tests to determine fairness for many years, Professor Mazo explains. “But only the Supreme Court can make the decision of which of these tests should be used and it has been reluctant to wade into these waters,” he says.

In 2019, the U.S. Supreme Court agreed to hear two partisan gerrymandering cases—Rucho v. Common Cause, a case from North Carolina, and Lamone v. Benisek, a Maryland case. In Benisek, the Democratic-controlled legislature had redrawn Maryland’s congressional districts specifically to get rid of a Republican congressman. In Rucho, according to Court documents, North Carolina’s Republican-controlled legislature “instructed their mapmaker to use political data to draw a map that would produce a congressional delegation of 10 Republicans and three Democrats.” After the 2016 election, that is exactly what happened. In addition, North Carolina Republican candidates for its state senate won a minority of the popular vote and still took 29 of 50 seats. The two cases were consolidated and the Supreme Court heard oral arguments in March 2019.

The 5 to 4 decision was handed down in June 2019 and Chief Justice John Roberts wrote the majority opinion. The Supreme Court avoided resolving the gerrymandering issue, ruling that partisan gerrymandering was beyond the reach of the federal courts.

While Justice Roberts acknowledged in his opinion that partisan gerrymandering may be “incompatible with democratic principles…We conclude that partisan gerrymandering claims present political questions beyond the reach of the federal courts.” Justice Roberts went on to say, “The districting plans at issue here are highly partisan, by any measure. The question is whether the courts below appropriately exercised judicial power when they found them unconstitutional as well.” The Court found, “There are no legal standards discernible in the Constitution for making such judgments, let alone limited and precise standards that are clear, manageable and politically neutral.”

In her dissenting opinion, Justice Elena Kagan took the majority to task for not finding a “workable legal standard to apply” in these cases.

“The practices challenged in these cases imperil our system of government,” Justice Kagan wrote. “Part of the court’s role in that system is to defend its foundations. None is more important than free and fair elections.”

Rucho and Benisek were sent back to the lower court with instructions to dismiss for lack of jurisdiction.

Up to state courts

“The object of all elections is to ascertain, fairly and truthfully, the will of the people,” the North Carolina judges wrote in their opinion. They determined that the maps drawn by the Republican-controlled state legislature “do not permit voters to freely choose their representative, but rather representatives are choosing voters based upon sophisticated partisan sorting.”

The judges urged the state legislature to draw new maps for the 2020 election.

“The North Carolina court ruled that gerrymandering was wrong under a state’s constitution, rather than under the federal constitution, and in doing so showed that it is possible for courts to resolve partisan gerrymandering claims successfully,” Professor Mazo says. He also points to the Pennsylvania Supreme Court, which also relied on its state constitution to strike down Pennsylvania’s congressional districts in 2018 for being partisan. In addition, voters in several states, including Michigan and Colorado, passed ballot measures that address gerrymandering. Other states, such as Arkansas and Oregon are considering similar measures.

In the meantime, North Carolina’s state legislature presented the court with a newly drawn map in December 2019. The same court that struck down the earlier map is allowing this one to stand for the 2020 primaries, citing the lack of time for determining whether the new maps are also partisan gerrymanders.