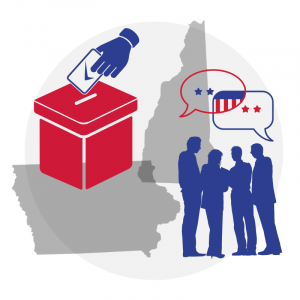 In 2020, Americans will once again (as they do every four years) head to the voting booth to elect a president. Before that happens, though, the nation needs to select candidates to run in each party.

While it may feel like the 2020 election process has been going on forever, the real contest doesn’t kick off until February 3, 2020 with the Iowa caucus. A week later, on February 11th, it’s New Hampshire’s turn when the nation’s first presidential primary of 2020 will be held.

What’s the difference between a caucus and a primary? A primary is essentially like voting on any Election Day. Voters go in a voting booth and pull a lever or push a button for a particular candidate. While a primary is anonymous, a caucus is not. It is a more deliberative process and is more time consuming, requiring a huge time commitment from participants.

Caucuses are usually held in a public place, like a high school gymnasium. Voters that show up actually physically stand in an area designated for their chosen candidate. So, you definitely know which candidate your neighbor supports. If your chosen candidate doesn’t garner enough support, in other words if he or she doesn’t get enough percentage of voters standing in his or her area, those voters can either opt to go home or they can choose to support a different candidate and stand in that designated area. During a caucus there is open discussion about the candidates. Supporters openly advocate for their chosen candidate and try to convince undecided voters to join them.

Jeff Kaufmann, the chairman of the Republican Party of Iowa has described the difference between primaries and caucuses like this: “A primary is a vote; a caucus is a conversation and a vote.”

Another difference is that state governments run primaries, while caucuses are run by party organizations, like the Democratic or Republican parties. What both methods have in common is that when finished the candidates collect needed delegates toward winning the nomination. For instance, to secure the 2020 Democratic Party nomination, candidates must collect 1,990 of 3,979 available delegates.

So, which is better—caucus or primary?

“One is not better than the other,” says Eugene Mazo, a professor at Rutgers Law School and an expert in election law. “They are just very different methods.”

Professor Mazo, who is the author of a new book, The Best Candidate: Presidential Nomination in Polarized Times, points out that in a primary a candidate only needs a plurality of the votes, not a majority. He also notes that caucuses are more expensive to run because they include several stages.

“Caucuses are criticized because they have low attendance,” Professor Mazo says. “You have to show up and spend hours and hours.”

Why does Iowa go first? It’s mostly out of tradition but it is also because the Hawkeye State has such a complex process before they even get to caucus day. The state holds precinct caucuses, county conventions and district conventions in the month leading up to the caucus.

New Hampshire being the nation’s first primary, on the other hand, is very deliberate on the Granite State’s part. Beginning in 1920, it was tradition that New Hampshire held the first presidential primary. Then, in 1968, New Hampshire’s state legislature passed a law to ensure that its primary would be first. The law gave New Hampshire officials the power to change the date of its primary if another state elected to hold a primary prior to the date selected by New Hampshire.

Primaries and caucuses weren’t always the way we came up with our presidential nominees, Professor Mazo notes. He explains that in the old days “party elites nominated the candidates for president.” The people didn’t get involved until the ballot was set and the candidates were chosen.

According to Professor Mazo, the country has Teddy Roosevelt to thank for the modern presidential primary. He explains that in 1912 the former president attempted to make a third presidential run (this was before the 22nd Amendment made that impossible) because he was mad at President William Taft, who succeeded former President Roosevelt to the presidency.

Being the current president at that time, President Taft controlled the Republican Party, but Roosevelt wanted to show he was more popular, according to Professor Mazo. The only avenue open to him was to win presidential primaries.

In 1912, there were only six primaries scheduled. Roosevelt was able to persuade another seven states to hold primaries, bringing the total to 13. He won all but one primary, but lost the Republican nomination to his rival. Roosevelt’s third-party presidential bid also failed and ultimately the Democrat, Woodrow Wilson, would win the presidency.

In his book, Let the People Rule: Theodore Roosevelt and the Birth of the Presidential Primary, historian Geoffrey Cowan noted that Roosevelt wasn’t a big believer in direct democracy or that the people had the right to participate in selecting presidential candidates. He just knew that it was his only path to winning the nomination.

In an interview with The Christian Science Monitor, Cowan said Roosevelt came around, eventually becoming an advocate for “letting the people rule.”

“In politics, people adopt the rules that they think will help them,” Cowan said. “We try to think that we operate on principle, but our principles are very much affected by whom we favor and what rules will help them.”

Teddy Roosevelt may be credited with establishing the modern presidential primary, but it was the 1968 Democratic National Convention where it became clear changes to the process were needed.

The 1960s and particularly the election year of 1968, was a turbulent time in our nation. Protests to the Vietnam War and the assassinations of Martin Luther King Jr. and Robert Kennedy caused major unrest and tensions were running high.

When Vice President Hubert Humphrey won the Democratic nomination for president at the 1968 Democratic National Convention in Chicago, riots broke out. Eighty percent of primary voters had backed other candidates, including Senator Eugene McCarthy who was seen as the “peace” candidate. Vice President Humphrey had not even entered any of the 13 primaries that were held. At that time, bosses of the Democratic Party held more sway over selecting a candidate.

After the turmoil at the convention, Democratic leaders formed what became known as the McGovern-Fraser Commission, which made recommendations to broaden participation within the party especially to minorities. One recommendation the Commission made was to require an open delegate selection process. In other words, party leaders could no longer handpick the party’s candidate in secret.

The Republican Party would eventually go along with these changes as well. As a result, more and more states shifted to hosting presidential primaries or caucuses as a way to select candidates, giving the people more of a say in which candidate was put forward in the general presidential election. Today both parties in all 50 states hold either a caucus or primary to determine its presidential candidate.

Going back to Iowa and New Hampshire, is it fair that those states go first in the process? Some think that it isn’t given that both states lack diversity and are approximately 90 percent white. Others say that these states do the best job of narrowing the field of candidates. In addition, supporters of keeping Iowa and New Hampshire first contend that starting with smaller states ensures that candidates can visit every county to court voters. They also point to the fact that advertising is cheaper in Iowa giving lesser-known candidates a fighting chance to compete with the frontrunners and be seen by voters. That could give those candidates momentum and attract donors allowing them to stay in the race.

For example, Jimmy Carter was relatively unknown until he won the Iowa caucus. That victory propelled him to do well in subsequent state primaries, winning the Democratic nomination and ultimately the presidency. The economies of New Hampshire and Iowa also depend on the revenue brought in by the focus on the state with media and teams from all the campaigns descending on those states.

Still, several solutions have been suggested to address the diversity issue, including rotating the states that go first each year or having all the primaries on the same day. Professor Mazo likes the primary day idea, but also notes that candidates would probably tend to campaign in bigger states if that was the case.

In a perfect world, Professor Mazo says that he would like to see all the states treated equally, noting that New Jersey is usually not relevant at all since its primary is in June and the nominees have usually been decided by then. It doesn’t seem like the current situation will be changing any time soon, so Iowa and New Hampshire will continue to go first for the foreseeable future.

Glossary Words
caucus: used in some states, this is a meeting where local members of a political party voice their preference among a slate of candidates for office.
deliberative: intended for consideration or discussion.
plurality: number of votes received by a candidate who receives more than any other but does not obtain a majority.
primary: a preliminary election by a political party to select a candidate for office.