A Long Road for the 27th Amendment—And the ERA Too 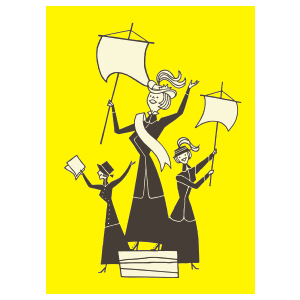 The 27th Amendment to the U.S. Constitution, which is the last one to be added to the document, states: “No law varying the compensation for the services of the Senators and Representatives, shall take effect, until an election of Representatives shall have intervened.” It’s pretty straightforward, essentially saying any pay raise that Congress gives itself will not take effect until another election occurs.

What is unique about this amendment is that is was proposed by James Madison in 1789, but ratified more than 200 years later in 1992. Madison sent the amendment, along with 11 others, to the states for ratification on September 25, 1789. Ten of those amendments would become the Bill of Rights.

The road to the 27th Amendment’s ratification would have ended there, but in 1982 Gregory Watson, a University of Texas at Austin student, wrote a paper for a political science course arguing that Madison’s amendment was still viable and could be ratified since Congress had not put an expiration date on it. He received a “C” on the paper (the professor was not convinced by his argument). To prove his point, he instituted a letter-writing campaign to state legislatures that had not ratified the amendment.

A 1921 U.S. Supreme Court ruling held “ratification [of a constitutional amendment] must be within some reasonable time after the proposal.” A later decision from the Court, however, ruled that it is up to Congress to determine whether an amendment with no time limit is still viable.

Needless to say, Watson’s letter-writing campaign was a success and the 27th Amendment was ratified, becoming part of the U.S. Constitution on May 5, 1992. In 2017, Watson’s grade was even changed to an “A.”

The passage of the 27th Amendment changed everything for the Equal Rights Amendment (ERA), which was thought to be dead. The ERA was sent to the states for ratification on March 22, 1972 and ultimately received approval from 35 states, falling three states short of the 38 needed. To ERA advocates, if the 27th Amendment could pass after a 203-year-long delay then there was hope for the ERA as well. It indicated to them that Congress has the power to maintain the legal viability of the ERA’s 35 state ratifications, meaning that they still only needed three more for it to pass. So advocates adopted the “three-state strategy” in 1994. The strategy focused on urging the 15 states that had not ratified the amendment to do so.

As a result of the new strategy, Nevada ratified the ERA in March 2017 and Illinois did the same in May 2018. To date, 13 states (Alabama, Arizona, Arkansas, Florida, Georgia, Louisiana, Mississippi, Missouri, North Carolina, Oklahoma, South Carolina, Utah and Virginia) still have not ratified the ERA. In 2018, an effort for Virginia to be the final state ratification failed.

In 1923, on the 75th Anniversary of the first Women’s Rights Convention in Seneca Falls, NY, Alice Paul introduced the Equal Rights Amendment. The original amendment stated: “Men and women shall have equal rights throughout the United States and every place subject to its jurisdiction. Congress shall have power to enforce this article by appropriate legislation.”

That amendment was introduced in every congressional session until it passed both houses of Congress with reworded language in 1972. The current ERA states: “Section 1: Equality of rights under the law shall not be denied or abridged by the United States or by any state on account of sex. Section 2: The Congress shall have the power to enforce, by appropriate legislation, the provisions of this article. Section 3: This amendment shall take effect two years after the date of ratification.”

In 1978, Congress voted to extend the original seven-year deadline for ratification of the ERA until June 30, 1982. Despite the extension, no more states had ratified the amendment by the new deadline.

To date, the only equality among men and women specified in the U.S. Constitution is the right to vote. According to the Alice Paul Institute in Mt. Laurel, NJ, from birth the way males and females obtain their constitutional rights are different. “We have not moved beyond the traditional assumption that males hold rights and females, if treated unequally, must prove that they hold them.”

But critics contend the ERA is no longer needed because women have made great strides since the time the amendment was first proposed, pointing to laws protecting women against discrimination. U.S. Census Bureau data reveals, however, that women still earn 80.5 cents for every dollar a white man earns and women of color earn even less—61 cents for African American women and 53 cents for Latina women. Asian American women fare a little better, earning 85 cents. To put this in perspective, an African American woman doing the same job must work for 20 months to earn the same amount that a white man earns in a year.

According to the Institute for Women’s Policy Research, for white women, the earnings gap will not close until 2059. Estimates are that the gap likely won’t close for African American women until 2119 and not until 2224 for Latina women. The U.S. is ranked 45th in the Global Gender Gap of nations, coming in behind Belarus and Namibia. Iceland comes the closest to full gender pay equality, followed by Finland, Norway, Sweden and Denmark.

“Statutes are not enough because they can be rescinded,” said the late Lenora Lapidus, director of the Women’s Rights Project at the American Civil Liberties Union. “A constitutional amendment is permanent.”

Where We Go From Here

According to Lapidus, once the last state ratification is obtained there will be some issues to work out. “Congress has to take some action to extend the deadline or some other action needs to be taken,” she advised.

By extending the deadline in 1978, Congress demonstrated that it does have that power. In addition, Article V of the U.S. Constitution has no mention of a time limit for a constitutional amendment; just that three-fourths of state legislatures need to ratify for it to become part of the U.S. Constitution. Another argument that the imposed deadline should not bar final ratification is that it appears in the proposing clause, not the actual amendment.

Abigail Adams wrote in a 1776 letter to her husband, John, “In the new code of laws, remember the ladies and do not put such unlimited power into the hands of the husbands.” Perhaps if the ERA is ultimately ratified, the ladies will finally be remembered.

Glossary Words
ratified: approved or endorsed.
rescind: revoke, cancel or repeal.
statute: legislation that has been signed into law.