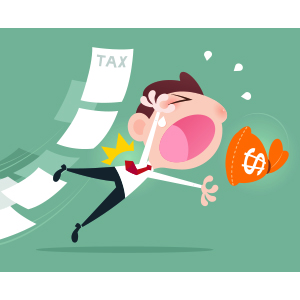 Nothing may be more complicated (or snooze-worthy) than a discussion of taxes, but that is what the 16th Amendment to the U.S. Constitution is all about. The Amendment states: “The Congress shall have power to lay and collect taxes on incomes, from whatever source derived, without apportionment among the several States, and without regard to any census or enumeration.”

Article I, Section 8 of the U.S. Constitution allowed Congress to “lay and collect taxes.” Article 1, Section 9, however, limited Congress to taxing each state according to its overall population, not its residents’ individual wealth. In other words, if a small state, such as Rhode Island, represented two percent of the country’s population, it would pay two percent of the total federal tax. The passage of the 16th Amendment in 1913 removed the apportionment requirement.

The first call for a federal income tax came during the War of 1812 as a way to fund the war. The proposal was never implemented. It wasn’t until the Civil War that the first federal income tax was imposed. The Revenue Act of 1861 charged a three percent flat tax on anyone earning more than $800 (that would be $22,300 in today’s dollars). That tax remained in effect until it was repealed in 1872.

A Tax By Any Other Name

Before the passage of the 16th Amendment, the primary source of federal revenue was the collection of tariffs and excise taxes. So, what’s the difference between a regular tax, an excise tax and a tariff?

Cynthia Blum, a professor at Rutgers Law School and co-director of its Federal Tax Law Clinic, explains that a tax is a compulsory payment imposed by and paid to a government authority. A tariff is a different type of tax, which is charged on imported goods and usually paid by the importer to the country’s customs service.  An excise tax, Professor Blum says, is a tax paid by the consumer on the purchase of a specific good or service (i.e., a gas tax or taxes on alcohol). The government usually collects excise taxes from the producer or provider.

Tariffs are thought to penalize the lower classes. Professor Blum says that is because tariffs are based on imported items that may either be purchased directly by consumers or become part of a larger product sold to consumers. For example, a tariff on steel or aluminum will affect the price of a can of soda.

Relief for the Poor

During the late 1800s, many believed that high tariff rates put the burden of funding the federal government on the poor and wanted to shift that burden to the wealthy by taxing income. That belief is still held by many today. In 1894, Congress passed the Wilson-Gorman Tariff Act, which lowered tariff rates. To make up for the shortfall of lower tariffs, the Act imposed a tax on corporate profits, gifts and inheritances, along with a two percent tax on incomes over $4,000 (about $116,000 today).

In 1895, the U.S. Supreme Court issued a decision in Pollock v. Farmers’ Loan & Trust Co., which struck down the income tax proposed in the Wilson-Gorman Tariff Act. The Court ruled that the income tax imposed was not constitutional because it was a direct tax not apportioned among the states based upon their population. The Court’s decision in the case would prevent the proposal of an income tax until the 16th Amendment was passed in 1913.

Once the Amendment was ratified by the states, Congress passed the Revenue Act of 1913, which lowered the tariff rate from 40 percent to 26 percent and established a one percent tax on income above $3,000 (around $66,000 today) and a six percent rate on those earning more than $500,000 (around $11 million today). Only three percent of the U.S. population was affected by the federal income tax at the time.

Glossary Words
apportionment: allocation or distribution.
compulsory: required or enforced.
enumeration: establishing the number of something.
excise tax: a tax on manufactured goods.
tariff: a tax paid on a particular class of imports or exports.