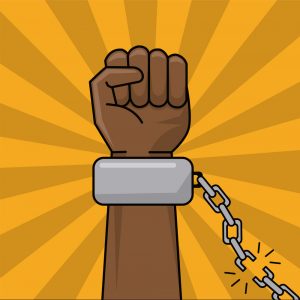 Frederick Douglass, a former slave who became the most well known African American leader of the 1800s, called slavery “the great sin and shame of America.” The United States still grapples with that shame today.

The Transatlantic Slave Trade dates back to the 15th Century. In the United States (or what would eventually become the U.S.) it began in 1619 with the first British colony in Jamestown, Virginia. Ship records show that the colonists arrived with “20 and odd enslaved Africans.” The institution would last 246 years on American soil.

During those years, many laws were passed with the goal of keeping slaves in bondage. For instance, in 1662 Virginia passed a law that made any child of a slave a slave as well. In 1664, Maryland declared that all black people in the colony were slaves for life. Historians estimate that six to seven million slaves were imported to the New World via the slave trade during the 1700s.

The United States banned the slave trade (but not slavery) in 1807. The ban went into effect in 1808; however, the slave trade still continued until 1860. The institution thrived, especially in the South where it was vital to the economy. By 1860 at the start of the Civil War, the number of slaves in the U.S. had reached four million.

Initially, slavery was legal in all 13 colonies. After the American Revolution, however, the Northern colonies saw the similarities between Great Britain’s oppression of the colonists and the oppression of slaves. As a result, Northern states started abolishing slavery beginning in 1774, setting up the divisions in the country that would give way to the Civil War. One exception in the North was Connecticut, which passed an act of Gradual Abolition in 1794. The act stated that children born into slavery would be freed when they turn 25. As a result, slavery was legal in Connecticut until approximately 1848.

During the Civil War, President Abraham Lincoln issued the Emancipation Proclamation on January 1, 1863, which said, “slaves within any State, or designated part of a State…in rebellion…shall be then, thenceforward and forever free.” The Proclamation was important for a number of reasons, including changing the focus of the war and putting the issue of slavery front and center. Prior to the Proclamation, President Lincoln’s main goal was to preserve the Union. With the Emancipation Proclamation, freedom from slavery became the goal as well. According to the American Battlefield Trust, issuing the Proclamation was also a tactical maneuver on Lincoln’s part, as it prevented the involvement of foreign nations (Great Britain and France) that might have helped the Confederacy. Since most Europeans were against slavery and had abolished the institution in their homelands, they would not want to aid the side fighting to preserve it. In addition, the Proclamation was a way to diminish the South’s labor force, paving the way for African Americans to fight for their own freedom. The U.S. military took in more than 200,000 former slaves, forming the United States Colored Troops.

One shortcoming of the Proclamation was that it only applied to the Confederate states that were rebelling, not in the border states (Missouri, Kentucky, Delaware and Maryland), which allowed slavery but had not joined the Confederacy. President Lincoln intentionally exempted those states so that they were not tempted to fight with the Confederacy.

So, when the war was over and the North prevailed, why didn’t the President just re-issue the proclamation, making it apply to the entire United States? Because future presidents can rescind proclamations or executive orders. In addition, nothing would prevent Southern state legislatures from reintroducing slavery into their state constitutions. In order to secure the freedom of all the formerly enslaved, a constitutional amendment was needed.

The 13th Amendment to the U.S. Constitution is the first of three amendments, along with Amendments 14 and 15, known as the Reconstruction Amendments. Any Southern state that wanted to re-enter the Union after the war was required to ratify the 13th Amendment.

Passed by Congress on February 1, 1865 and ratified by the states on December 6, 1865, the 13th Amendment stated: “Neither slavery nor involuntary servitude, except as punishment for a crime whereof the party shall have been duly convicted, shall exist within the United States, or any place subject to their jurisdiction.”

Notably, the 13th Amendment contains the first time the word “slavery” is mentioned in the U.S. Constitution. The Constitution alludes to slavery several times before the addition of this amendment but never uses the actual word. For example, Article I, Section 2, Clause 3 of the Constitution stated that congressional representation would be based on “the whole number of free persons…and three fifths of all other persons [referring to slaves].” Article I, Section 9, Clause 1 allowed Congress to outlaw the slave trade in 1808 but referred to it as “the importation of persons” and Article IV, Section 2, Clause 3, which dealt with fugitive slaves, referred to them as a “person held to service or labour.”

Taja-Nia Henderson, a professor at Rutgers Law School, who researches and writes on the topic of slavery, says, “The language of the 13th Amendment, as is true for every other amendment to the U.S. Constitution, is a product of political compromise.”

Senator Charles Sumner of Massachusetts, Professor Henderson notes, proposed a resolution for the abolition of slavery that included an extension of “equality before the law” to the freedmen; however, a competing resolution by Senator John Henderson of Missouri included abolition only.

“With an eye toward achieving passage of the bill, Senator Henderson’s resolution mirrored the Northwest Ordinance of 1787, which had prohibited slavery in the territories with the language: ‘There shall be neither slavery nor involuntary servitude in the said territory, otherwise than in punishment for crimes whereof the party shall have been duly convicted,’” Professor Henderson says. She also notes that Thomas Jefferson was the original author of the “no slavery” language that was later incorporated into the Northwest Ordinance.

Is there a difference between slavery and involuntary servitude? According to Professor Henderson, both are forms of coerced labor and involve violence and terror.

In 1873, the U.S. Supreme Court ruled “the word servitude is of larger meaning than slavery…and the obvious purpose was to forbid all shades and conditions of African slavery.” The Court also held that the 13th Amendment applied to other races as well and “forbids any other kind of slavery, now or hereafter. If Mexican peonage or the Chinese coolie labor system shall develop slavery of the Mexican or Chinese race within our territory, this amendment may safely be trusted to make it void.” The coolie trade refers to the importation of Asian contract laborers during the 19th Century.

The 13th Amendment has been cited in lawsuits attempting to define mandatory community service, taxation and the draft as involuntary servitude. The U.S. Supreme Court has consistently rejected those claims.

The clause in the 13th Amendment that states that slavery is abolished “except as punishment for a crime whereof the party shall have been duly convicted” left open a loophole, allowing the practice of convict leasing to flourish, particularly in the South. Convict leasing was a practice where prisons or jails provided convicts to private parties, like plantations, or corporations, such as U.S. Steel, for “lease.” The lessee (the entity “purchasing” the convicts) would pay the prison and be responsible for feeding, clothing and housing the prisoners. The prisoners were paid nothing. In fact, in 1871, the Virginia Supreme Court issued a ruling that declared a convicted person was “a slave of the state.”

Professor Henderson points out that the “leasing out” of convicted and detained persons from the nation’s prisons and jails had a long history, dating back to as early as 1844.

“Not surprisingly, that history is bound up in the nation’s history of slavery and racial subjugation,” she says. Professor Henderson has done extensive research on this subject and found that “prisoners’ labor was exploited differently, according to race, long before the 13th Amendment was ratified.” The exception for persons convicted of crimes written into the Amendment was exploited by all the states, she says.

“The reliance upon Southern jurisdictions for convict labor deriving from specious claims of criminality is the more well known story,” Professor Henderson says, “primarily because prisoners and their families refused to stay silent about the atrocities happening inside and outside the walls of Southern prisons.”

The “specious claims of criminality” that Professor Henderson refers to are so called black codes, which were restrictive laws that targeted African Americans and became prevalent in the South after the Civil War. For instance, Mississippi, which enacted the first black code, required African American men to have written evidence of employment for the entire year beginning every January. They would be subject to arrest if they attempted to leave before the contract was up and any wages would be forfeited. Convictions of minor crimes, such as vagrancy, loitering and malicious mischief, created a pipeline for convict leasing, sending the newly freed slaves into a new type of slavery.

In 1893, Ida B. Wells, an African American investigative journalist and leader in the civil rights movement, wrote about the convict lease system, pointing out that judges “extend clemency to white criminals and mete severe punishment to black criminals for the same or lesser crimes.” The People’s Advocate, a Negro journal based in Atlanta, Wells notes in her article, revealed that in 1892 “90 percent of Georgia’s convicts are colored.”

Douglas A. Blackmon, author of Slavery By Another Name: The Re-Enslavement of Black Americans from the Civil War to World War II, said in an interview with Newsweek, “There were tens of millions of African Americans that over this 80-year period either one way or another were forced to live on a farm or in a lumber camp or were forced into convict leasing by the perverted justice system.”

While the practice of convict leasing ended in the 1930s, Professor Henderson notes that even today, jurisdictions across the U.S. extract labor from incarcerated persons without paying them a minimum wage.

Discussion Questions
1. Why do you think the word slavery was not used in the U.S. Constitution until the 13th Amendment, with the framers going out of their way not to use the word?
2. Why do you think that slavery flourished more in the South than the North (with the exception of Connecticut)?
3. In what ways was the oppression of the American colonists by the British similar to the oppression of African American slaves? In what ways were they different?
4. Some claim that the 13th Amendment makes mandatory community service, including the draft, unconstitutional. The courts have rejected those claims. Do you agree or disagree with the courts? Explain your answer.
5. Do you think it is fair that prisoners today are not paid a minimum wage for their work? Why or why not?

Glossary Words
abolition: the action or act of abolishing a system or practice.
chattel: an item of property other than real estate.
clemency: a pardon or shortening of a prison sentence.
rescind: revoke, cancel or repeal.
loitering: lingering in a public place with no particular purpose.
peonage: the use of laborers bound in servitude because of a debt.
specious: superficially plausible, but wrong in actuality.
subjugation: bringing someone or something under control or domination.
vagrancy: legally refers to being without visible means of support.