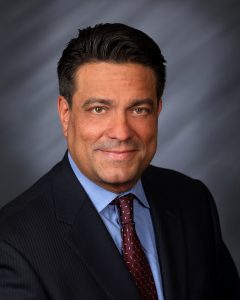 When Norberto A. Garcia and his family emigrated from Cuba to the United States in the mid-1970s, they did not speak a word of English. Garcia, then six, easily picked up his new language, but for older members of his family the transition was more difficult.

Growing up in North Bergen, his parents were occasionally called names and his family was taken advantage of at times (particularly after his father died eight years after their arrival) because they did not know their rights in their newly adopted country. Garcia still recalls the time a tow truck operator taunted his mother, who barely spoke English, and scammed her out of money.

Today, Garcia is poised to become the first Latino president in the history of the New Jersey State Bar Foundation. He will be sworn in this week at the New Jersey Law Center in New Brunswick.

On the eve of his installation, Garcia reflected on his experience and his plans for the organization, the educational and philanthropic arm of the New Jersey State Bar Association (NJSBA).

His new role is all the more significant because the top leadership positions at the foundation and the NJSBA are held by two Hispanics. Evelyn Padin, who is of Puerto Rican descent, was installed as NJSBA president last month.

The new presidents are both a reflection of the legal profession’s progress toward becoming more diverse and inclusive, and indicative of the achievements of minority members.

“His tenure marks a historic chapter in the rich history of the foundation. It is essential that our profession and its leadership reflects the diversity that makes New Jersey special, and I am confident he will be a thoughtful and energetic leader,” Feeney said.

George Rios, a past president of the Hispanic Bar Association of New Jersey, said Garcia and Padin will be role models for young lawyers.

Lawyers new to the profession will have more incentive to participate in the bar organizations knowing they can advance in them, become better lawyers and help their practices, Rios said.

Diversity in the Bar

Garcia said he would like the state bar association and foundation to become more diverse.

“There is still the perception by some folks that county bar associations and the state bar association are the last bastion of the old boy network, or privilege,” Garcia said.

“When they see that Evelyn, a woman, a solo practitioner, a Puerto Rican from Jersey City, and me, a Cuban immigrant from Hudson County, are presidents of the state bar association and foundation, it signals, ‘hey, become more engaged, be a part of the organization. Don’t just congregate with your local, specialized bar association or affinity bar association. You can be part of both.’ I’m part of both and that sends the message of inclusion,” he said.

A graduate of Seton Hall University and the University of Pennsylvania Law School, Garcia is a personal injury lawyer who specializes in medical malpractice cases at Blume Forte Fried Zerres & Molinari.

Garcia said he was inspired to become a lawyer because of his experience of being an immigrant and feeling vulnerable.

“I just never wanted to feel that way again,” he said. “I thought being a lawyer would give me the ability to walk into any room and not feel marginalized, intimidated or powerless.”

Despite enduring occasional slurs about his heritage, Garcia was resilient and felt enormous pride in his Hispanic culture.

“I grew up in Hudson County, where just about everybody in my classes were immigrants like me, fresh off the boat, or first generation,” Garcia said.

He said growing up among such a rich diversity of people in Hudson County shielded him from more homogenous sectors of American life. It was not until he went off to an Ivy League law school that he became acutely aware of being a minority.

“I didn’t pick up on issues of diversity because I just grew up in it,” he said.

While at Penn Law, Garcia served as president of the Latin American Law Students Association and mentored Hispanic students, who were at greater risk of not completing law school.

Warm and personable, Garcia is described by his peers as a respected lawyer with great trial skills.

“He is a very down-to-earth person, which probably is why he is such a good trial lawyer,” he said.

Goals for the Foundation

The foundation’s budget outlook is bright, Garcia said, which opens the possibility of adding new programs that educate the public about the law and the justice system.

“I want to continue in the direction we’ve been going. We’re going to look to see where the need is and we’re trying to encourage new proposals,” he said.

Garcia said he wants to create greater awareness of civics and how government works. He said the public often does not understand how best to address their concerns or complaints to the appropriate government official or department.

“I’d like to see the foundation fill in those gaps overall, but also be responsive as issues come up,” Garcia said.

Garcia believes in the good work of the foundation and its power to educate. It’s not only good for the community, but good for the lawyers who get involved.

“When I come to events like Law Day in Union City, I come away floating on air. My wheels are not touching the ground on my ride home. I’m elated and elevated to be doing something right and good for the public,” he said.

Service to the community “lifts this from being a business to being a profession,” Garcia said.