Courts to Decide the Fate of Two National Monuments 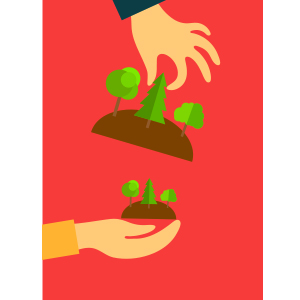 For more than a century, U.S. presidents have declared national monuments, which preserve land that protect endangered species, ecosystems or historical artifacts. Now, lawsuits waiting to be heard in Washington, DC federal court may ultimately decide whether a president has the authority to shrink a previously established national monument.

The issue came up in December 2017 when President Donald Trump announced the reduction of two national monuments in Utah. The reductions went into effect on February 2, 2018. The president’s proclamation downsized the Grand Staircase-Escalante National Monument by half from 1.9 million acres to 997,490 acres. Similarly, Bears Ears National Monument was shrunk from 1.35 million acres to 201,876 acres, an 85 percent reduction in size.

President Trump’s reductions of these sites, reportedly the largest ever ordered by a president, were immediately met with lawsuits from environmental and conservation groups, as well as Native American tribes. The plaintiffs in the cases contend shrinking the national monuments opens up once-protected land to mining, gas drilling and other commercial uses that could diminish the monuments’ natural beauty and disturb the fragile environment surrounding them. Native American tribes add that shrinking the national monuments would threaten culturally significant tribal lands. In fact, it was a coalition of five tribes that requested former President Barack Obama to designate Bears Ears as a national monument in 2016.

Advocates of the reductions argue local and state officials, as well as residents of Utah, should have a say in how land within their borders is used instead of the federal government. Freeing monument land for economic development will provide more jobs and revenue in the towns surrounding the monuments, advocates say.

The lawsuits also contend that reducing the size of Bears Ears puts current archeological digs in jeopardy. In February 2018, paleontologists working in Bears Ears discovered the remains of three intact phytosaurs, a crocodile-like species that also have blowholes. This species dates back more than 250 million years to the Triassic Period, which predates the Jurassic Period. The fossils were discovered on the land that is no longer protected.

Robert Gay, the paleontologist leading researchers at the dig site, told news reporters that without national monument designation, “anyone can come and collect plant fossils and shells, legally. It’s not prohibited. Whereas in a monument, that activity is restricted to permitted scientists.”

As for the Grand Staircase-Escalante monument, David Polly, president of the Society of Vertebrate Paleontology, told The Washington Post that it ranks as one of the “most important examples of the Mesozoic Era and has yielded 27 new species never known to science before.”

Grand Staircase-Escalante also contains commercially viable shale gas deposits that could be developed by gas companies. Bears Ears is rich in uranium, which can be used as fuel in nuclear reactors.

The Antiquities Act of 1906

In challenging the reductions, the plaintiffs base their argument on a century-old law, the Antiquities Act of 1906, which was enacted to stop the theft of ancient artifacts from archeological sites in the Southwest. The Act enables the president to quickly set aside portions of federally owned land that contain “historic landmarks, historic and prehistoric structures, and other objects of historic or scientific interest.”

President Theodore Roosevelt was the first president to establish a national monument under the Antiquities Act—Devils Tower in Wyoming. Over the years, 17 presidents have designated a total of 158 national monuments.

The Antiquities Act doesn’t expressly give presidents the authority to reduce or revoke a monument, yet several have trimmed the size of national monuments. Compared to the reductions President Trump made, previous changes were mostly small in scale and, most importantly, never challenged in court.

In one example, Washington State’s Olympia Peninsula National Monument was reduced three times since it was designated in 1909. President Woodrow Wilson downsized the monument during World War I because the nation needed lumber. The boundaries were later restored in 1938 when Congress declared the monument a national park.

The Antiquities Act also states the president must confine the monument to “the smallest area compatible with the proper care and management of the objects to be protected.” On that point, supporters of the reductions in Utah argue that the monuments were too big and, therefore, due for a re-sizing.

On the other hand, Kathryn Kovacs, an environmental law professor at Rutgers Law School, says courts have not restricted presidential power to mandate the size of a national monument. Professor Kovacs, who previously worked in the Department of Justice’s Environment and Natural Resources Division, points to the 2003 case of Tulare County v. Bush where the U.S. Court of Appeals in DC ruled the president wasn’t obligated to justify the size of a national monument. The case involved the Giant Sequoia National Monument in California, established by President Bill Clinton in April 2000.

“Essentially, the courts won’t second guess the size of the monument,” Professor Kovacs says. “So the claim the monuments were bigger than they needed to be may be an uphill climb.”

The reductions by President Trump followed a review by then-Interior Department Secretary Ryan Zinke of 27 national monuments designated in the past 20 years. His report recommended cutting the size of Bears Ears and Grand Staircase-Escalante, which were established by Presidents Barack Obama and Bill Clinton, respectively.

Under the Property Clause of the Constitution, Congress “shall have power to dispose of and make all needful rules and regulations respecting the territory or other property belonging to the United States…” The Property Clause doesn’t conflict with a president’s authority to declare national monuments, Professor Kovacs explains.

The latest development on the lawsuits came in September 2018 when a U.S. district court judge ruled the cases would be heard in Washington, DC. The Department of Justice had requested the lawsuits be heard in Utah state court. The judge also consolidated the three cases dealing with Bears Ears into one case and the two dealing with Grand Staircase-Escalante into another case. In addition, the judge also ruled the government must inform the plaintiffs if any proposals are submitted to explore mining on the land. At press time, a trial date had not been set.

Professor Kovacs predicts the court will ultimately rule in the plaintiffs’ favor, though she admits it may be a close call. Courts typically grant presidents authority that may not be spelled out in a statute but is implied. In other words, although a statute doesn’t state a president has the authority to do something, it may imply he or she has the right to take certain actions.

“On the one hand the language is quite clear. The president is given the authority to designate, but not expressly the authority to revoke,” Professor Kovacs says. “But there are a lot of situations where the courts have held that the president has implied authority. It wouldn’t be crazy for a court to go that route.”

Discussion Questions
1. Should a sitting president have the right to reduce monuments that previous presidents have designated? Why or why not?
2. Should public lands be preserved even if there are natural resources that could be developed from them, such as coal, gas or oil?
3. What are the benefits of studying 250 million year old fossils? Does the government have an obligation to protect them?

Glossary Words
plaintiff: person or persons bringing a civil lawsuit against another person or entity.