Amendments That Define the Presidency 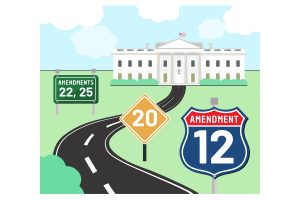 The President of the United States has a big job, which is outlined in Article II of the U.S. Constitution. It makes sense that a few amendments would be needed over the years to clear up a few things. Here are four amendments that clarify the presidency.

After the Founding Fathers wrote the U.S. Constitution in 1787, outlining the rules of the Electoral College to elect a president, the first two presidential elections went great—probably because George Washington was elected unanimously. It was the election of 1796 that showed cracks in the system. Then the 1800 election, which ended in a tie, sealed the deal—a constitutional amendment was clearly needed.

In the original system of electing a president, the electors of each state voted for two candidates. The top vote getter became president, while the person with the next highest total was appointed vice president. In 1796, John Adams received the most votes and finishing in second place was Thomas Jefferson. The problem with that outcome was that the two men were from different parties and found it hard to work together, especially on foreign affairs. At a time when the French Revolution was raging, President Adams was pro-British, while Vice President Jefferson favored the French.

Proposals were made to fix the rules, but no action was taken, which resulted in the election of 1800 ending in a tie between Vice President Jefferson and Aaron Burr. In incidents of a tie, the election of the president falls to the House of Representatives, which took 36 votes to break the election gridlock.

With the ratification of the 20th Amendment in 1933, January 20th was officially designated as the day that the President would take the oath of office. Prior to the 20th Amendment, the President took office on March 4th, a date that was set in 1788. With Election Day held in November that created an almost four-month “lame duck” period of governance. The congressional term began in March as well. The 20th Amendment moved that date to January 3rd.

The March date may have been selected because 18th Century America functioned at a slower pace and elected officials probably needed the time to prepare and get their affairs in order. The trip to the capitol could also be a long journey for some, depending on what state they were from. With the modern age, however, that was no longer the case. The long lag time between the old and new administrations were particularly difficult after the elections of Abraham Lincoln and Franklin D. Roosevelt. President Lincoln could not address the problem of the Southern secession until he became President and likewise, President Roosevelt needed to deal with the Great Depression, but couldn’t until he took the oath of office. The 74th Congress in 1935 was the first to begin on January 3rd and the first presidential term under the 20th Amendment was President Roosevelt’s second term, which began on January 20, 1937.

When the U.S. Constitution was being written, there was much debate over term limits for the President. Thomas Jefferson advocated for a seven-year term with no eligibility for re-election, others proposed a two-term limit with differing lengths of time in office. Alexander Hamilton and James Madison supported presidential lifetime appointments (keep in mind that a “lifetime” in 1787 was much shorter than it is now). Hamilton also didn’t want the president elected by the people, but selected by Congress. The concept of a lifetime appointment was not endorsed, failing six votes to four. One Virginia delegate compared the idea to having an “elective monarchy.”

Ultimately, the Framers settled on four-year presidential terms, but left no restrictions on how many times a president could be re-elected. President Washington, however, set a tradition with his presidency of only serving two terms. Thomas Jefferson carried on the tradition after his second term in office as well.

Three presidents—Ulysses S. Grant, Grover Cleveland and Woodrow Wilson—attempted and failed to gain a third term. Multiple presidential terms didn’t become a problem until 1940 when President Franklin D. Roosevelt ran and was elected to a third term. President Roosevelt was so popular in fact that he was elected to an unprecedented fourth term in office, though he only served three full terms. He died a few months into his fourth term on April 12, 1945, after serving as president for 4,422 days.

In response to President Roosevelt’s unprecedented elections, Congress proposed the 22nd Amendment to the U.S. Constitution, which limits the President to two terms or a maximum of eight years in office. A person can actually serve 10 years as President under the amendment. If the Vice President finishes two years or less of a presidential term, he or she is still eligible to serve two terms of his or her own. If however, a Vice President serves out more than two years of a presidential term, he or she would only be eligible to serve one more term.

The 22nd Amendment was ratified by the states on February 27, 1951. Five years later, the first of 54 attempts to repeal the 22nd Amendment was undertaken in Congress. Several presidents over the years, including Presidents Harry Truman, Ronald Reagan and Bill Clinton, have voiced their displeasure with the amendment. President Reagan called it “an infringement on the democratic rights of the people.” In a Rolling Stone interview, President Bill Clinton suggested altering the amendment to say “two consecutive terms,” allowing for re-election at a later date.

The 25th Amendment, ratified by the states on February 10, 1967, basically deals with the order of presidential succession and what happens if or when a president is unable to fulfill the duties of the office. The issue has been debated as far back as John Tyler in 1841 when he took over for President William Henry Harrison, who died of pneumonia just 32 days after taking office (the shortest presidency in American history). There was confusion at the time about whether Tyler was actually president or acting president.

Presidential succession acts in 1792, 1886 and 1947 attempted to clarify the issue but the 25th Amendment, ratified in 1967, made some things clearer and others a little murkier. The amendment contains four sections, with Sections 1 and 2 clarifying the role of the Vice President. Section 1 stipulates that upon removal of the president from office due to death or resignation, the Vice President becomes President, not just assuming the duties of the office but with all the power that the office holds. Section 2 of the amendment states that when there is a vacancy in the office of Vice President the President “shall nominate” a replacement who would need to be confirmed by a majority of both Houses of Congress. In the past when a VP had taken over for a president he had not bothered to appoint a replacement in the VP role.

It is Section 4 of the 25th Amendment where things get a little dicey. While sections 1 through 3 have been invoked before, this section has never been tested. In 1963, when President John F. Kennedy was assassinated, members of Congress pondered what would have happened if the President had survived but was in a mentally diminished capacity. Despite the issues with the Tyler presidency and the fact that seven more presidents died in office after that, it was the assassination of President Kennedy that was the real motivation for the 25th Amendment. Section 4 of the amendment allows for the involuntary removal of a president and the process begins with the Vice President. If the VP and the majority of the President’s cabinet believe that the President is “unable to discharge the powers and duties of his office,” under Section 4, they can submit a written statement to that effect to Congress.

Where this section gets a little murky is that the President can submit “his written declaration that no inability exists” and resume the powers of the office. Presumably, the President would then fire his cabinet members (though not the Vice President because he is an elected official). Legal scholars argue that this could potentially lead to two cabinets and two Presidents (the VP acting as President as well as the President in question). Ultimately, Congress would have to vote on whether the President is fit to return to office. In order to remove a President from office, a two-thirds majority (called a super majority) in both chambers of Congress (Senate and the House) is required.

Senator Birch Bayh, who is credited with writing the 25th Amendment, said years later that “the determination of the president’s disability is really a political question” not a medical one. That is why there is no medical diagnosis required to invoke Section 4 of the amendment.

Discussion Questions
1. Why do you think the eligibility requirements of the president (natural born citizen, at least 35 years old and a resident of the U.S. for at least 14 years) are important.
2. What benefits or difficulties come with being a “lame duck” president?
3. Research the three presidents that attempted but failed to win a third term. What were the circumstances in each case? What was their motivation for breaking with convention to seek a third term?
4. Do you agree with the 22nd Amendment or do you think as President Reagan did that it infringes on the rights of the American people?
5. What problems do you think might occur if a President was allowed to be re-elected indefinitely?
6. What do you think of Section 4 of the 25th Amendment? Do you think a President’s VP and cabinet has the right to determine whether or not a President is fit to serve? Explain your reasoning.

Glossary Words:
lame duck: an official who is in the final period of his or her term of office after a successor has been selected.
monarchy: the form of government with a monarch (king or queen) as the head.
ratify: to give formal consent to an agreement.
repeal: revoked.