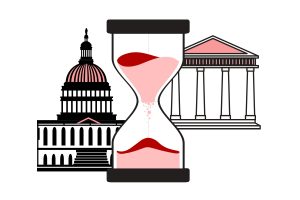 No one likes the guest that stays too long at the party. But in terms of those that govern or adjudicate, how long is too long?

The longest serving member of Congress was Congressman John Dingell, who represented Michigan for more than 59 years from 1955 until he retired in 2015. Close behind him are six others who served in Congress for more than 50 years.

Service to the country is noble and some would say that as long as his or her constituents duly elect a representative or senator, what’s the problem? Others contend that staying too long can make a legislator complacent and out of touch with constituents. In addition, these critics contend that lawmakers could become vulnerable to corruption if they think of the position, not as a temporary assignment, but as a career, focusing more on re-election campaigns than important issues and creating good policy.

The U.S. Constitution sets no term limit on congressmen in the House or senators in the Senate. Congressmen serve two-year terms and senators serve six-year terms. Both can serve an unlimited number of terms as long as they are re-elected.

This did not please Thomas Jefferson, who said, “I apprehend that the total abandonment of the principle of rotation in the offices of President and Senator will end in abuse.” Jefferson’s view was that citizens should be elected for a short period of time with the knowledge that they would eventually “return into the mass of people and become the governed instead of the governor, which might still keep alive that regard to the public good that otherwise they might perhaps be induced by their independence to forget.”

Unlike Jefferson, Roger Sherman, a lesser-known Founding Father representing Connecticut, said, “Nothing renders government more unstable than a frequent change of the persons that administer it.” Obviously Sherman was not a fan of congressional term limits, but according to a 2016 Rasmussen report, the American people are, with 74 percent of voters favoring them.

Opponents of congressional term limits contend that imposing them would take power away from voters. For example, say there is a terrific congresswoman that serves her constituents well and would be re-elected but she has exhausted her number of terms. In that instance, voters would be denied their favored representation. Another argument against term limits is that bipartisan relationships develop over time and a term limit could impede those relationships, decreasing the probability that significant legislation would get passed.

U.S. Term Limits, Inc. is a Washington, D.C. based, non-profit organization that advocates for term limits at all levels of government and defends state legislatures that impose them. In 1995, Ray Thornton, a congressman in Arkansas challenged an amendment to the state’s constitution barring candidates from serving more than three terms.

“The U.S. Supreme Court declared in U.S. Term Limits, Inc. v. Thornton that Congress cannot add to the specific qualifications already spelled out in the U.S. Constitution for office in the House or Senate,” says Perry Dane, a constitutional law professor at Rutgers Law School—Camden. “Any additional limitations, including term limits, would require a constitutional amendment.”

After the decision in the Thornton case, The Citizen Legislature Act was proposed in the House of Representatives. The Act was an amendment to the U.S. Constitution that would have imposed 12-year term limits on all members of the U.S. Congress (six two-year terms for the House and two six-year terms for the Senate). The measure, which required a two-thirds majority, failed in the House by a vote of 227-204. Similar legislation has been proposed as recently as 2017, however, it hasn’t gone anywhere.

How long to wear the robe?

Article III of the U.S. Constitution sets up the parameters of the federal judiciary. Section 1 of the Article states: “The Judges, both of the supreme and inferior Courts, shall hold their Offices during good Behavior…”

This clause has been interpreted to mean that federal judges and Supreme Court justices enjoy lifetime appointments, meaning that unless a judge or justice retires or is impeached, he or she is there until death. Many opponents of lifetime judicial appointments point out that when the U.S. Constitution was written life expectancy was around 40 years of age. According to The New York Times, Supreme Court justices confirmed before 1800 lived to an average age of 67, while those confirmed between 1950 through 1974 lived to nearly 82. The oldest person to serve on the Court was Justice Oliver Wendell Holmes Jr., who was 90 when he retired. The Federal Judicial Center revealed that as of 2018, one in six federal judges is 80 or older and more than three dozen judges are in their 90s.

A change like that would also require an amendment to the U.S. Constitution, says Professor Dane, who once clerked for U.S. Supreme Court Justice William Brennan, and doesn’t think term limits are a good idea for judges or justices.

“For one thing, judges do gain in wisdom and perspective the longer they serve,” Professor Dane says. “More important, though, term limits tend to compromise judicial independence and potentially distort judicial decision-making.”

Professor Dane points out that when Alexander Hamilton was drumming up support for ratification of the U.S. Constitution, he wrote in Federalist No. 78, “If … the courts of justice are to be considered as the bulwarks of a limited Constitution against legislative encroachments, this consideration will afford a strong argument for the permanent tenure of judicial offices, since nothing will contribute so much as this to that independent spirit in the judges which must be essential to the faithful performance of so arduous a duty.”

Mandatory retirement could be a viable option, Professor Dane says, if the retirement age is “set reasonably, so that it likely comes at a point when judges would be unlikely to be seeking another position (say, age 75 or 80).” He points out that mandatory retirement could have several benefits, including “healthy turnover in the courts, predictability about judicial terms, and reducing the incidence of judges past their prime ‘hanging on’ simply as a matter of ego or stubbornness or out of concern that their replacements would be ideologically unpalatable [meaning he or she wouldn’t vote the same way].”

Setting aside term limits or mandatory retirement, Professor Dane thinks the real problem with America’s federal judiciary is the way judges are picked in the first place—through a political process.

“The American judicial selection process, taken as a whole, is simply bizarre by world standards,” Professor Dane says. “Most countries at least try to keep partisan politics out of the process for judicial selection. We haven’t managed to do that, and the system we have in place has become increasingly dysfunctional and dangerous.”

Rethinking the judicial selection process, Professor Dane believes, is what is truly needed and points to countries like Great Britain that use Judicial Appointment Commissions, consisting of a combination of judges, attorneys, and lay people, all of whom are appointed without regard to political party, to select judges.

An undertaking such as this in the U.S. would require a constitutional amendment as well.

“To be sure, amending the Constitution would be difficult,” says Professor Dane.  “But if we’re going to take the trouble to consider an amendment of Article III, I’d much rather pour energy into redesigning the appointment process than tinkering with term limits or the like.”

Discussion Questions:
1. Do you agree with Thomas Jefferson that there should be term limits for members of Congress? Why or why not?
2. What are some advantages and disadvantages to term limits for U.S. Supreme Court justices and for Congress?
3. How does setting term limits of governing bodies affect different groups in our society?
4. Think about other professions that serve the public (firemen, police). Which professions do you think would benefit from mandatory retirement? Why?

Glossary Words:
adjudicate: to act as a judge.
bipartisan: supported by two political parties.
constituents: members of a body of voters in a specified area who elect governmental representatives.
partisan: someone who supports a particular political party or cause with great devotion.
impeach: to charge the holder of public office (in this case a judge or justice) with wrongdoing.
tenure: permanence in regard to an occupation (i.e., judges).