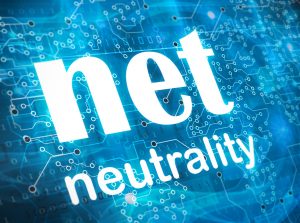 In today’s fast-paced world consumers expect a speedy Internet service. The days of waiting endlessly for a website to load are a thing of the past. Or, are they?

In the spring 2015 edition of The Legal Eagle, we published a story (Keeping the Internet Neutral) on historic regulations approved by the Federal Communications Commission (FCC) designed to keep the Internet open and accessible to everyone at the same speed. The regulations required Internet providers like Comcast, Verizon and AT&T to treat all content equally, meaning the providers could not give preference to certain media sources. For instance, if a cable company is affiliated with a content provider like Netflix, it could not give preference or allow Netflix content to stream faster than competitors like Hulu.

Since that article was published, in December 2017 the FCC, under the Trump Administration, voted 3-2 to abolish those regulations. In June 2018, after a comment period when millions of consumers advocated for keeping the 2015 net neutrality regulations in place, the new policy took effect. Under the new rules, Internet service providers could make content providers pay for faster delivery speeds, creating “fast and slow lanes.” Those increased costs would likely be passed on to the consumer.

At the time of the vote, FCC Commissioner Jessica Rosenworcel, who dissented from the majority, said, “As a result of today’s misguided action, our broadband providers will get extraordinary new power from this agency. They will have the power to block websites, throttle services and censor online content. They will have the right to discriminate and favor the Internet traffic of those companies with whom they have pay-for-play arrangements and the right to consign all others to a slow and bumpy road.”

A poll conducted by the University of Maryland’s Program for Public Consultation revealed that 83 percent of voters were in favor of keeping the 2015 FCC regulations governing net neutrality in place.

Despite language in the new FCC regulations that bars states from instituting their own net neutrality laws, the governors of six states, including New Jersey, issued executive orders doing just that, according to the National Conference of State Legislatures.

Signing New Jersey’s executive order in February 2018, Governor Phil Murphy said in a press statement, “We may not agree with everything we see online, but that does not give us a justifiable reason to block the free, uninterrupted, and indiscriminate flow of information. And, it certainly doesn’t give certain companies or individuals a right to pay their way to the front of the line.”

Four states—California, Oregon, Washington and Vermont—have passed laws regulating net neutrality. Signed into law in September 2018, California’s law is by far the toughest and goes further than the FCC regulations that were repealed. The Golden State’s law also prohibits “zero rating,” a promotion that provides unlimited streaming of certain sites for free but charges a fee for others.

Since the Internet is “worldwide,” does regulation at the state level muddy the waters?

“State and local net neutrality rules do make it difficult to operate in a uniform way,” says Ellen Goodman, a professor at Rutgers Law School—Camden, who specializes in information policy law, including digital platform power. “However, what often happens is that the most restrictive version becomes the de facto law, in which case something like California’s version might govern.”

The attorneys general of 22 states plus the District of Columbia, led by New York Attorney General Barbara Underwood, filed a lawsuit in the U.S. Court of Appeals for the D.C. Circuit to block the FCC’s rollback of net neutrality regulations. These 22 states and DC represent 165 million Americans or 50 percent of the U.S. population.

According to the lawsuit, the states claim that the FCC harmed consumers by accepting the promises of Internet service providers despite “substantial recorded evidence showing that [broadband] providers have abused…and will abuse their gatekeeper roles in ways that harm consumers and threaten public safety.” In addition, the lawsuit asks that the court invalidate the portion of the FCC’s order that bars state net neutrality laws, as the commission “identified no valid authority” that would impede states from instituting such laws.

Almost immediately after California’s net neutrality law was signed, the Department of Justice sued the state in federal court. The DOJ is seeking a preliminary injunction to stop California’s law from taking effect on January 1, 2019.

“States do not regulate interstate commerce—the federal government does,” then Attorney General Jeff Sessions said in a statement.

“The federal government in many cases has the authority to preempt state telecoms regulation so it’s not clear whether state neutrality laws can survive,” says Professor Goodman, who is co-director and co-founder of the Rutgers Institute for Information Policy & Law. “What the states certainly do have the power to do, however, is to control state procurement and limit deals to entities that comply with open Internet principles.”

You may be thinking that you haven’t seen any difference in your Internet speeds. Industry experts predict that the effects will happen gradually as providers won’t want to outrage consumers who are already upset by the net neutrality issue.

“The more troubling outcome could accumulate over time: power may concentrate further in the hands of a small group of digital giants,” Alex Fitzpatrick, who covers technology for Time magazine, wrote in a recent column. “Without net neutrality rules preventing favoritism, the existing tech titans—even if they grow inferior—will face fewer fights from upstarts. Service providers could cut deals incentivizing users to opt for existing services instead of smaller rivals. That could leave us with fewer alternatives when the giants behave badly.”

Glossary Words:
injunction — a judicial order that requires halting a specific action.
procurement: the action of acquiring something.