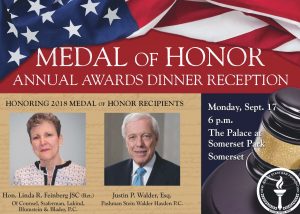 The award, given each year to those who have made exemplary contributions to improving the justice system and enhancing New Jersey’s legal legacy, will be presented at the Foundation’s Annual Medal of Honor Awards Dinner Reception on Monday, Sept. 17 at The Palace at Somerset Park in Somerset.

“Both our wonderful honorees this year have displayed excellence in their distinguished careers,” said Lynn Fontaine Newsome, president of the NJSBF. “In addition, they both have a profound record of service to the public and the profession. We are so thrilled to be able to recognize them with the Foundation’s greatest accolade.”

“Professionalism and civility are traditions of the legal profession that should always be honored and celebrated,” said Susan Feeney, the Foundation’s first vice president. “Our two medal awardees this year are shining examples of integrity and leadership, and I am so pleased the Foundation will be recognizing their illustrious careers.”

Walder and Feinberg were named this year’s honorees by the Foundation Board of Trustees, led by Newsome, Feeney, and additional executive board members Norbert A. Garcia, second vice president; Kathleen N. Fennelly, treasurer; and Charles J. Stoia, secretary.

Judge Feinberg began her legal career as a labor attorney with the U.S. Department of the Army. In Jan. 1975, she was appointed as an assistant prosecutor in Mercer County, and joined the faculty of The College of New Jersey (TCNJ) in 1977, as part of the law and justice department.

While teaching at TCNJ, Feinberg entered private practice and was also appointed a municipal court judge in Lawrence, Hopewell and West Windsor townships. In 1988, she was appointed presiding judge of the municipal courts in Mercer County.

In 1992, Governor James Florio appointed her to the New Jersey Superior Court. She served first as the presiding judge of the family part in Mercer County and then as assignment judge for the Mercer County Vicinage. She served in that position until her retirement in 2012. Shortly afterwards, she returned to private practice of counsel with the firm Szaferman, Lakind, Blumstein & Blader in Lawrenceville.

“Over the years, as a lawyer and as a judge, I have worked to honor the dignity of the profession of law, to foster professional excellence, to treat clients and litigants with patience and respect, and to provide services to the legal community and to the community at large,” Feinberg said. “I am one of so many lawyers and judges in this State who, each day, follow the same principles and apply the highest standards of our profession. I extend my thanks and appreciation to the Foundation for selecting me as one of this year’s recipients.”

Craig Hubert, a partner at Szaferman, Lakind, Blumstein & Blader who nominated Feinberg for the Medal of Honor, recalled meeting her when he was a young prosecutor and she was a judge. “In every case, she would approach the issues with the thoughtfulness, intelligence, and pragmatism that the litigants of this state have a right to expect from a Superior Court Judge,” he said “During her entire term as Assignment Judge, she worked to expand access to justice for the benefit of every citizen of Mercer County and our great state…I can think of no one more qualified to receive this award.”

‘Everything that is positive about being a lawyer’

Walder received acclaim for his professionalism beginning early in his career. In 1971, he was recognized by the New Jersey State Bar Association as the Outstanding Young Attorney of New Jersey.­­­ He began his career as a deputy attorney general, successfully defending the constitutionality of the Sunday closing laws. He went on to serve as an assistant Essex County prosecutor, where, as the chief of economic crimes, he prosecuted the largest Ponzi scheme in the state.

Currently co-chair of the litigation department at Pashman, Stein, Walder, Hayden, he notably represented a superior court judge in a case where the New Jersey Supreme Court agreed that the Pension and Healthcare Benefits Act violated the New Jersey Constitution. In 2016, he successfully argued a New Jersey Supreme Court case that led to the immediate reinstatement of a lawyer who had been disbarred. Walder has volunteered for countless educational seminars and served in a number of professional organizations, including six years as state chair of the Fellows of the American Bar Foundation.

“I am honored and humbled to receive this award,” Walder said. “I credit the extraordinary team at Pashman Stein Walder Hayden. They provide tremendous resources, and I am blessed to be part of an amazing group of attorneys who are truly dedicated to justice and the practice of law in keeping with the highest standards of our profession. To receive this honor from the New Jersey State Bar Foundation is one of the proudest moments of my career.”

“Justin’s career is unrivaled in that he has been on the short list of go-to litigators, both on the civil and criminal sides, for decades, and he remains there today,” said Michael Stein, a fellow partner at Walder’s firm. “He has earned that longstanding recognition the old-fashioned way—by working hard, always sweating the details, and being an honorable professional. The way he has lived his life exemplifies everything that is positive about being a lawyer.”

To purchase tickets for the event, click here. For more on sponsorship opportunities or how to purchase an ad in the 60th Anniversary Commemorative Dinner Program, click here. Questions, call Cynthia Pellegrino at 732-937-7507 or email [email protected]