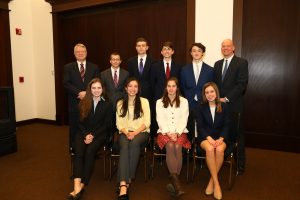 The win marks Mendham’s fifth win since the 2009-2010 school year. Mainland Regional, which placed second, is also a multiple past winner of the state championship, having won first place three times in recent years. Mendham will now represent New Jersey in the National Mock Trial Championship, to be held in Reno, Nev. this May.

Each team that enters has a teacher-coach. In addition, the competition sponsors make every effort to match teams with volunteer attorney-coaches.

Over 200 high schools signed up to take part in this year’s competition, which centered around the fictional case State v. Dana Martin. The case covers a subject that has received increasing attention in the last few years: the opioid epidemic. In the fact pattern, the state and the parent of the young man who died of a Fentanyl overdose seek justice from Dana Martin, who they believe provided the deadly drug. Meanwhile, Martin maintains innocence.

Teams initially compete against other schools in their own county. County champions then visited the New Jersey Law Center in New Brunswick in February for a two-phase playoff round, followed by semi-finals and state finals in March.