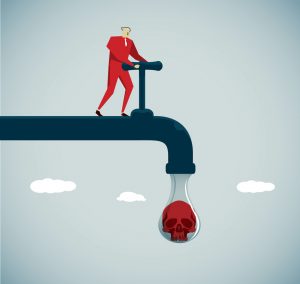 There is no reference to the right to clean water in the U.S. Constitution; however, the United Nations General Assembly does recognize a “human right to water.”

In the winter 2017 edition of The Legal Eagle, we published a story on the clean water crisis in United States, specifically in Flint, Michigan, where residents haven’t had clean drinking water since 2014 when city officials decided to switch the town’s water supply to the Flint River. By 2015, children in Flint had elevated levels of lead in their systems.

Since that article was published, a $722 million class action lawsuit was filed against the Environmental Protection Agency (EPA) on behalf of 1,700 Flint residents; the EPA awarded the city of Flint $100 million for drinking water infrastructure upgrades; and a federal judge approved a $97 million settlement that requires Michigan to replace water lines for 18,000 Flint households by 2020.

Economics professors at West Virginia University and Kansas University studied health statistics in Flint between May 2007 and March 2015. In a working paper published in August 2017, the professors found that the fertility rates in Flint dropped by 12 percent and fetal deaths increased by 58 percent. According to the paper, the professors estimate that roughly 198 to 276 more babies would have been born from November 2013 to March 2015 had the city not switched its water supply, poisoning the water with lead.

“Because the higher lead content of the new water supply was unknown at the time, this decrease in [the general fertility rate] is likely a reflection of an increase in fetal deaths and miscarriages and not a behavior change…” the paper concluded.

As of October 2017, six Michigan officials face involuntary manslaughter charges in the Flint water probe, including the head of the Michigan health department and the state’s chief medical examiner. The charges stem from more than 80 cases of Legionnaires’ disease that resulted in 12 deaths. Officials in Michigan failed to warn residents of the outbreak.

Legionnaires’ disease is a severe type of pneumonia usually caused by inhaling bacteria. Professor Marc Edwards, a Virginia Tech researcher, contends that the corrosive water in Flint created the environment where the bacteria could grow, linking the deaths to the water crisis.

“What we discovered was that when the Flint River water went into the system it released a lot of iron, and removed the disinfectant from the water,” Professor Edwards told CNN. “And in combination, those two factors, the iron as a nutrient and the disinfectant disappearing, allowed legionella [the bacteria that causes Legionnaires’ disease] to thrive in buildings where it could not do so previously.”

The six officials charged could face up to 15 years in prison if convicted.

As Steve Gold, a professor at Rutgers Law School—Newark, who teaches courses on federal environmental law, explains, the federal law that most directly protects drinking water is the Safe Drinking Water Act (SDWA). Regulating public utilities that provide drinking water, the SDWA, passed by Congress in 1974, was designed to ensure that drinking water does not contain contaminants at levels that could be harmful to public health.

The EPA administers the SDWA and sets limits on the allowed concentration of various contaminants that could be found in drinking water, Professor Gold says. Utilities are required to ensure that the drinking water provided to their customers does not exceed the limits.

“Of course, in Flint the water contained lead at levels much above the legal limit,” Professor Gold notes. “What happened in Flint reminds us that the success of the Safe Drinking Water Act depends on careful compliance by water utilities and vigilant enforcement by the EPA and the state environmental agencies that work with the EPA.”

What Other Laws Protect Us?

Professor Gold notes there are other federal environmental laws that protect drinking water even though they do not directly regulate the drinking water supply. For instance, the Clean Water Act makes it illegal to discharge pollutants into waters of the United States without a valid permit.

“The Clean Water Act applies to all surface waters of the United States, even those that are not and may never be sources of drinking water,” he says. “This does not mean that there is no water pollution, but it does reduce the amount of certain pollutants that circulate in the water cycle.”

In addition, the Resource Conservation and Recovery Act regulates the treatment, storage and disposal of hazardous waste. While this statute might not seem to be about water pollution, Professor Gold says it provides important protection for groundwater, which is used as a source of drinking water in many places.

Finally, the federal Superfund Law, formally known as the Comprehensive Environmental Response, Compensation and Liability Act, gives the EPA the power to clean up releases of hazardous substances, many of which threaten or contaminate surface water and groundwater supplies. “This statute is often applied to dumps that were created before we had environmental regulations or that were created in violation of the environmental rules that existed at the time,” Professor Gold says.

Check out the original article: Clean Water Crisis—What’s on Tap

Glossary Words:
involuntary manslaughter: the crime of killing another human being unlawfully but unintentionally.
statute: legislation that has been signed into law.