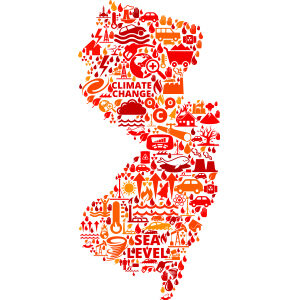 The National Climate Assessment, a congressionally mandated report, which was released in November 2022, revealed that over the past 50 years America has warmed 68% faster than the planet as a whole. In addition, the report showed that the U.S. has experienced severe sea level rise.

The Garden State takes environmental concerns seriously and is pursuing several avenues to protect New Jersey’s environment, including legislative action in Trenton and legal challenges in the courts.

In 2020, New Jersey lawmakers passed a law banning single-use plastic bags in stores. In May 2022, that law kicked in and New Jersey shoppers are now required to bring their own reusable bags to carry out their purchases. New Jersey’s plastic bag ban followed a 2021 law restricting the use of plastic straws, which are now only given to customers upon request.

“Plastic comes from petrochemical products,” she says. “So, we’re reducing all of the harmful impacts of oil exploration, production, and refining.”

Clean Ocean Action (COA), a New Jersey-based nonprofit dedicated to protecting the waterways in New Jersey and New York, gathers data on what clean-up volunteers collect at the beach. Its 2021 Beach Sweeps Report revealed that 82% of the debris on New Jersey beaches is made of plastic, including bottle caps, lids and straws.

Though a seemingly small measure, banning plastic bags can have a major impact on the environment. California implemented a similar ban in 2016. A year later, Californians Against Waste, a nonprofit organization that works to reduce waste and pollution and increase recycling, estimated plastic grocery bag litter dropped by 72% compared to 2010. According to NorthJersey.com, New Jersey’s new law has eliminated approximately three billion plastic bags since its implementation.

The plastic bag ban is just one action in the state’s ongoing efforts to improve the environment. In 2020, Governor Phil Murphy signed the state’s Energy Master Plan. The executive order aims to reduce the state’s greenhouse gas emissions by 80% below 2006 levels. The order also sets a goal of 100% clean energy by 2050. Initiatives include increasing electric vehicle adoption and investments in clean energy methods such as wind and solar power.

In October 2022, the New Jersey Division of Consumer Affairs and the New Jersey Department of Environmental Protection filed a lawsuit in Mercer County Superior Court against five major oil and gas companies on behalf of the residents of the state. The suit contends that the companies—Exxon Mobile, Shell Oil, Chevron Corp., BP, ConocoPhillips, as well as the American Petroleum Institute (API), a trade group for the oil industry—misled the public for decades about the impact of using fossil fuels on the climate and how that consumption would increase extreme weather conditions and sea level rise.

“They went to great lengths to hide the truth and mislead the people of New Jersey, and the world,” New Jersey Attorney General Matt Platkin said at a press conference in Jersey City. “In short, these companies put their profits ahead of our safety. It’s long overdue that the facts be aired in a New Jersey court, and the perpetrators of the disinformation campaign pay for the harms they’ve caused.”

Superstorm Sandy, one of the costliest hurricanes in 2012, for example, caused $37 billion in damages in New Jersey and an estimated death toll of between 34 and 43 people.

Anna Arata, a Shell Oil spokesperson, responded to the suit in a statement, saying, “We do not believe the courtroom is the right venue to address climate change, but that smart policy from government, supported by action from all business sectors, including ours, and from civil society, is the appropriate way to reach solutions and drive progress.”

The city of Hoboken filed a similar suit against big oil in 2020. Like other such suits against the fossil fuel industry, the Hoboken case has been delayed while the gas and oil companies attempt to have the cases heard in federal court where national regulations could be more favorable to them. In August 2022, Hoboken won its appeal to have the case heard in a New Jersey state court.

“It is abundantly clear that big oil’s decades-long campaign of misinformation has had an outsized impact on coastal cities like Hoboken, as we are forced to spend hundreds of millions of dollars to adapt to climate change,” Hoboken Mayor Ravi Bhalla said at the same Jersey City press conference.

Other states, including Rhode Island, Delaware, Minnesota, Massachusetts, Connecticut, and Vermont, as well as the District of Columbia, have filed similar suits against major oil companies.

In April 2022, New Jersey joined 15 other states, as well as the District of Columbia, in a lawsuit to block the U.S. Postal Service’s (USPS) purchase of 148,000 gas-powered vehicles. Filed by the attorneys general of 16 states and the District of Columbia along with Earthjustice and the Natural Resources Defense Council, the action was taken to boost the agency’s fleet of electric trucks.

Transportation is one of the leading contributors to air pollution and switching to electric vehicles is a step toward cleaner air, Professor Payne says. She contends that USPS trucks, which stop and start frequently, often idling in one place, emit more toxic exhaust than a passenger vehicle. USPS trucks also travel short distances, which are easily powered by a standard battery charge.

“USPS vehicles are the perfect candidate to be electrified,” Professor Payne says. “And it would be a real win for our neighborhoods not to have all of that pollution and smog coming out of the tailpipes.”

Environmental issues are not only front and center in New Jersey, but at the U.S. Supreme Court, as well. In June 2022, the Court limited the U.S. Environmental Protection Agency’s (EPA) ability to regulate carbon emissions from power plants under the Clean Air Act. The case, brought by the state of West Virginia, questioned the EPA’s regulatory control over the energy sector. By a 6-3 vote, the court sided with West Virginia, saying Congress hadn’t clearly given the EPA such powers.

“A decision of such magnitude and consequence rests with Congress itself, or an agency acting pursuant to a clear delegation from that representative body,” Chief Justice John Roberts wrote in the Court’s majority opinion.

“Whatever else this court may know about, it does not have a clue about how to address climate change,” Justice Elena Kagan wrote in dissent. “Yet the court today prevents congressionally authorized agency action to curb power plants’ carbon dioxide emissions. The court appoints itself—instead of Congress or the expert agency—the decision maker on climate policy. I cannot think of many things more frightening.”

Despite the Court’s decision, state and local authorities also have a say in capping the amount of carbon released into the air, Professor Payne says.

“The majority of carbon-based actions over the last 25 years have been at the state level, and I expect that to continue,” she says. “New Jersey can absolutely continue to limit carbon emissions and increase its regulations on carbon to whatever extent it chooses.”

According to the Pew Center on Global Climate Change, now known as the Center for Climate and Energy Solutions, 29 states, including New Jersey, have climate action plans. In addition, the Clean Energy States Alliance, a bipartisan US coalition of state energy agencies, maintains that 21 states, plus Puerto Rico and the District of Columbia, have clean energy target dates.

Glossary Words
appeal—a request that a higher court review the decision of a lower court.
bipartisan—supported by both political parties.
compensatory damages—money awarded to an injured party to compensate for damages, injury or other loss.
defendant— in a legal case, the person accused of civil wrongdoing or a criminal act.
punitive damages—damages that exceed simple compensation, which are awarded for the purpose of punishing the defendant.

This article originally appeared in the winter 2023 edition of The Legal Eagle. 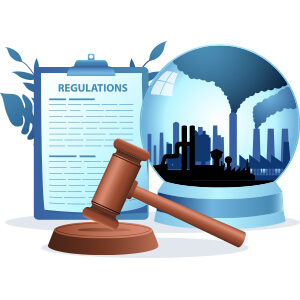 Another environmental action in the Garden State is New Jersey’s Environment Justice Law, passed by the New Jersey Legislature in 2020. The state collected public comments on the new law and issued a draft of the final rules in June 2022. Public hearings were held in July 2022 and the new rules could take effect by the end of the year.

The law would require developers of power plants, incinerators, sewage treatment and solid waste facilities, and landfills to show how they will reduce pollution in historically marginalized communities. A marginalized community is one that has unequal power and can face discrimination or barriers to civic participation based on racial, social or economic factors. The regulations will cover existing facilities renewing a permit from the state as well as new facilities.

According to the New Jersey Department of Environmental Protection (NJDEP), New Jersey is the “first state in the nation to require mandatory permit denials if an environmental justice analysis determines a new facility will have a disproportionately negative impact on overburdened communities.” The NJDEP estimates that of the 564 municipalities in New Jersey, 348 of them include overburdened communities. The population of those municipalities total more than 4.6 million residents.

During a roundtable discussion about the new law held in 2020, New Jersey Senator Cory Booker said, “This legislation and ultimately its implementation must do what it set out to do—protect overburdened communities, give environmental justice communities a fair shot at breathing clean air and having clean drinking water, and address the long history of environmental justice.”

Meanwhile, some business leaders contend the law could limit commerce in the state. At the same 2020 roundtable discussion, Raymond Cantor, vice president of government affairs for the New Jersey Business & Industry Association, said that while his group supported the legislation, it was too broad in its scope.

“The process alone, if this bill is not implemented in the right way by the Department of Environmental Protection, could kill off certain businesses right away,” Cantor said.

Seeking justice through the courts

In August 2022, the NJDEP filed seven lawsuits against alleged polluters around the state. The suits relate to contaminated (NJDEP) industrial properties in Newark and Middlesex Borough. Another action seeks to collect $597,000 in civil penalties owed to the NJDEP for illegal dumping at a former coal ash disposal site in Linden that was earmarked for redevelopment.

Professor Payne notes that the state has the authority to hold alleged polluters accountable.

“If polluters are not meeting the requirements of their permits, then the state can issue monetary fines in addition to injunctive action to make it so they cannot continue to pollute,” Professor Payne says .—Maria Wood