Check Out the Fall 2022 Edition of The Legal Eagle 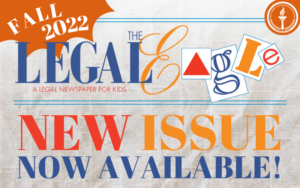 Any questions, contact the editor of The Legal Eagle, Jodi L. Miller. She can be reached via email at [email protected].

Here are the headlines from the fall 2022 issue:

In June 2022, the U.S. Supreme Court upheld the right of a football coach employed at a public school to pray on the field after games. The Court’s decision illustrates the complexity of interpreting the five clauses in the U.S. Constitution’s First Amendment.

The case, Kennedy v. Bremerton School District, involves Joseph Kennedy, an assistant high school football coach for the Bremerton School District in Bremerton, Washington, who prayed alone and with students. When the school district learned of Coach Kennedy’s activities, they communicated with him over time about possible limitations on his activities. Eventually, he was suspended and did not return to coaching the following year.  READ MORE

“Three strikes and you’re out” doesn’t just refer to baseball, it also applies to those who commit serious crimes in the Garden State. New Jersey is one of 28 states that have three strikes laws on the books.

Passed in 1995, New Jersey’s Three Strikes Law is based on a federal law, also passed in 1995, known as the Violent Crime Control and Law Enforcement Act. The law imposes mandatory life imprisonment for repeat offenders convicted of serious crimes at the federal level. READ MORE

Right to Remain Silent? Not About Passcodes

Increasingly, the nation’s courts need to look to the U.S. Constitution to interpret laws dealing with 21st century technology as digital devices become entrenched in everyday life, as well as in criminal activity.

Computers, cellphones, and other electronic devices were centuries from development when the U.S. Constitution was drafted; however today these devices have triggered numerous legal disputes over privacy, tracking, and unlawful searches. READ MORE

If you would like to be notified when new issues of The Legal Eagle have been published, sign up for a digital subscription. If you would like a FREE print subscription, you can subscribe using our Publication Order Form. You’ll be sent the last published issue and when new issues are printed, you’ll receive those as well. Please order as many as you need for your students.