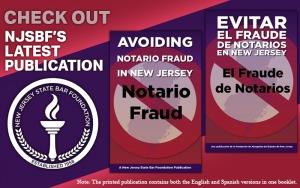 Inadequate representation in any legal matter can have devastating consequences. Those consequences are elevated in immigration matters where having an experienced immigration attorney can mean the difference in winning or losing a case.

There are laws against the Unauthorized Practice of Immigration Law (UPIL), which is more commonly known as notario fraud. Avoiding Notario Fraud in New Jersey, the New Jersey State Bar Foundation’s latest publication, explains what notario fraud is and the laws that provide protection from it.

Avoiding Notario Fraud in New Jersey was written by Lauren Herman, an attorney with Make the Road New Jersey, an immigrant advocacy organization, with assistance from Michael Noriega, an immigration attorney, as well as insight from Hon. Daniel D’Alessando, a Superior Court judge in Hudson County. The booklet outlines the New Jersey laws that protect against notario fraud, what can be done if you find yourself a victim of notario fraud, as well as the steps to take to ensure you’re not a victim.