Transgender Military Ban Tests Limits of Who Can Serve 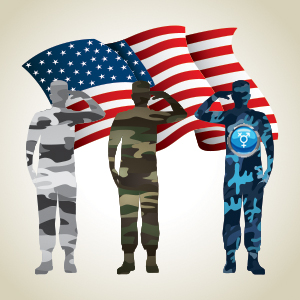 The military stands as a model of integration, with people of all races and ethnicities serving together for the common purpose of protecting the nation. But it wasn’t always that way.

African American and white soldiers were split into separate military units until the 1950s. Gays and lesbians couldn’t serve openly until the Don’t Ask, Don’t Tell policy, initiated in the mid-1990s, was repealed in 2011. Controversy over who can and can’t serve in the military has erupted again, this time for transgender individuals. According to GLAAD (formerly Gay & Lesbian Alliance Against Defamation), transgender describes people whose gender identity differs from the gender they were assigned at birth.

After the military allowed gays and lesbians to serve openly, the Obama Administration proposed allowing transgender individuals to enlist as well. In 2016, then-Secretary of Defense Ashton B. Carter removed the ban on transgender people serving openly in the military and set a date for accepting enlistments for January 1, 2018.

Putting it in reverse

In July 2017, before enlistments began, President Donald Trump reversed the Obama Administration policy and instituted a transgender military ban, which prompted a series of lawsuits claiming the ban is discriminatory. In part, the President’s original tweet announcing the ban stated, “Our military must be focused on decisive and overwhelming victory and cannot be burdened with the tremendous medical costs and disruption that transgender in the military would entail.”

Several LGBTQ advocacy organizations filed lawsuits on behalf of current transgender military members and also those seeking to enlist. The plaintiffs contend the ban amounts to discrimination against transgender people under the equal protection clause of the 14th Amendment to the U.S. Constitution. In addition, LGBTQ rights groups claim the ban will force currently serving transgender people out of the military.

In the fall of 2017, two federal judges blocked the ban, and it was put on hold temporarily. Then, in January 2019, the U.S. Supreme Court ruled in a 5-4 decision that the ban could stay in place as the lawsuits made their way through the lower court system.

Former Defense Secretary James Mattis had a committee of military personnel study the issue of transgender individuals serving in the military. In March 2018, the committee concluded that transgender recruits would disrupt military readiness and effectiveness.

After taking into account the recommendations of the committee, Secretary Mattis proposed an altered 2018 policy, which differed from President Trump’s initial call for a full ban of transgender military members. The new policy recommended that service members who had undergone a gender transition or were in the process of a transition prior to April 12, 2019—the date the ban was scheduled to start—could continue to serve.

As it stands now, after April 12, 2019, anyone diagnosed with gender dysphoria or undergoing a transition will be prohibited from joining the military. Gender dysphoria is a broadly used medical diagnosis that involves a conflict between a person’s physical or assigned gender and the gender with he/she/they identify.

Although current service members diagnosed with gender dysphoria can remain in the military, they must serve under the standards set for their birth gender, not the gender they identify themselves as. Military service members would not be eligible for medical services to assist in a gender transition, unless they joined while under the previous Obama Administration policy. That could mean some transgender individuals would choose to leave the military if they are not allowed to transition.

At a congressional hearing in February 2019, Congresswoman Jackie Speier, who is a member of the House Armed Services Committee and chairs the Military Personnel Subcommittee, said the ban “would cost us recruits at a time when so few Americans are willing to serve.”

Debra E. Guston, a Glen Rock attorney and past chair of the New Jersey State Bar Association’s LGBT Rights Section, says transgender individuals may not receive the medical and psychological attention they require under this new policy.

Impact on the military

Prior to lifting the ban on transgender individuals in the military, the RAND Corporation (stands for Research ANd Development) explored the possible impact of transgender soldiers serving. RAND is a global policy think tank, financed by the U.S. government, as well as corporations, universities and private individuals, that provides research and analysis to the U.S. Armed Forces. It is hard to estimate the number of transgender individuals who are actively serving in the military since they can’t serve openly. A 2016 RAND report, however, put the number at between 1,320 and 6,630, but noted that not all seek treatment for a transition. According to the Defense Department, there are 1.3 million active duty military. Out of a total $50 billion healthcare budget, the military estimates it spends approximately $8 million in transgender care.

RAND acknowledged that there is “limited research” on the effect of transgender service members and relied on research for foreign military outfits. It concluded that including transgender people would have “little or no impact on unit cohesion, operational effectiveness or readiness.”

With regard to costs, RAND predicted providing healthcare to transitioning soldiers would increase costs by $2.4 million each year. That amount represents a 0.4 percent to 0.13 percent jump in healthcare expenditures for active duty personnel.

Secretary Mattis disputed the RAND’s conclusion, which he said largely influenced the Obama Administration’s decision to allow transgender people to serve. In detailing his policy, he indicated his belief that RAND didn’t give sufficient weight to the costs and relied too heavily on foreign military experiences with “different operational requirements than our own.”

Therefore, Secretary Mattis wrote in the new policy that the Department of Defense should “proceed with caution before compounding the significant challenges inherent in treating gender dysphoria with the unique, highly stressful circumstances of military training and combat operations.”

Still, testimony from the chiefs of the Army, Navy, Marines and Air Force seemed to contradict that conclusion. During a 2018 congressional hearing, each testified they were unaware of any negative effects in their units arising from transgender personnel, but did say some commanders had to take time to help transgender individuals through their transitions.

Deference to the military

In the latest ruling on the ban, a U.S. Court of Appeals in the Ninth Circuit overturned a preliminary district court injunction on the ban in one of the lawsuits—Karnoski v. Trump. The decision handed down by the appeals court illustrates the long-standing tradition of courts deferring to the military on personnel matters, Guston explains.

“There’s been a long history of the courts respecting Congress and the military’s autonomy in making policy for the military,” she says.

Yet the appeals court also acknowledged that the 2018 revised policy put in place by Secretary Mattis could also be interpreted “on its face as treating transgender people differently than other persons.”

In their order, the appeals court judges remanded the case back to the district court, asking them to reconsider its ruling on the ban. The panel wrote “a presumption of deference is owed [to the government], because the 2018 policy appears to have been the product of independent military judgment.”

Guston points out the U.S. Supreme Court did not rule on whether the ban was constitutional, just that it could stay in place as the lawsuits were being heard in the lower courts.

“The Supreme Court did not allow the ban to be stopped, primarily because of this deference to the military and what it believes and states is necessary for military readiness,” Guston says.

Combat readiness was also the military’s basis for separating African Americans and white soldiers prior to the Korean War, Guston notes. That was in place until a 1948 Executive Order issued by President Harry Truman integrated the services.

Carlos A. Ball, a professor at Rutgers Law School—Newark and a national expert on LGBTQ rights, agrees that the courts are usually deferential to the military, but says the ban is unconstitutional.

“The transgender ban should not survive constitutional scrutiny,” Professor Ball says. “There is no rational basis for the exclusion; instead, it is based on raw prejudice against transgender individuals. Such individuals have been serving their country for generations.” He calls the ban “an affront to equality and basic fairness.”

Guston predicts that the lawsuits will continue to be litigated through the federal court system and the ultimate outcome will hinge on the 2020 presidential election.

Glossary Words
injunction: a judicial order that requires halting a specific action.
integrated: something that has been made available equally to all races.
plaintiff: person or persons bringing a civil lawsuit against another person or entity.
remand: to send a case back to a lower court.
repealed: revoked. A law that is repealed has been withdrawn or canceled and is no longer a law.