Does the U.S. Constitution Need a Re-Write? 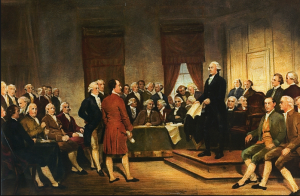 As a rule, written constitutions don’t last that long. Legal experts estimate the lifespan of a constitution is less than 20 years. Indeed, the United States’ first foray into a constitution, the Articles of Confederation, only lasted six years before making way for our current U.S. Constitution, the oldest still in use today.

So, at the age of 230 years, is it time for a constitutional rewrite? Members of both political parties say yes—and no.

It was clear pretty early on that the Articles of Confederation, ratified by all 13 states in 1781, was not working. It left the country’s central government weak, unable to collect taxes and having to rely on the states to voluntarily send tax money to fund the central government. You can imagine how that worked out.

According to the National Constitution Center, there were many issues with the Articles, including the fact that it didn’t establish a common U.S. currency. The federal government printed its own money, but each state could also do so. This made trade between the states difficult and a bit like going to a foreign country and having to exchange currency. In addition, the document was hard to amend, requiring unanimous consent from all 13 states.

The final nail in the Articles of Confederation’s coffin was the tax protest known as Shays’ Rebellion, led by Revolutionary War veteran Daniel Shays. The protest began on August 31, 1786 and lasted for six months. Massachusetts farmers protested the loss of their farms by taking over the Court of Common Pleas and releasing men who were imprisoned because they could not pay their debts. Because the federal government did not have the money to pay an army, the rebellion of more than 4,000 was ultimately defeated by a privately-funded militia, paid for by town merchants. The rebellion made clear to U.S. leaders such as Alexander Hamilton and George Washington that action was needed to amend the Articles so a Constitutional Convention was called.

Get Me a Rewrite

Delegates to the Constitutional Convention gathered in Philadelphia beginning in May 1787 thinking they were going to “tweak” the Articles. Nolan McCarty, a political science professor at Princeton University and chair of its Department of Politics, says it is hard to say whether all the delegates had the goal of throwing out the Articles of Confederation and writing a new constitution in mind, but they started working on a new one pretty quickly.

The framers of the new U.S. Constitution provided two ways to amend it, which are outlined in Article V of the new constitution. One way is for a member of Congress to propose an amendment. That proposal then needs two-thirds approval in both the House and Senate before it goes to the states for ratification. Since 1789 more than 11,000 proposed amendments have been introduced in Congress. Of those measures, 33 amendments have been sent to the states for ratification and of those 33, only 27 have obtained ratification and been enshrined in the U.S. Constitution. The second way the framers provided to amend the U.S. Constitution is for two-thirds of state legislatures (today that would be 34) to petition Congress for a constitutional convention. This second way of amending the constitution has never been used but is causing anxiety for members of both political parties.

According to the Constitutional Rights Foundation, over the years there have been approximately 400 petitions from state legislatures calling for a constitutional convention for one reason or another. None of those efforts were successful.

Today, parties on both sides of the aisle are calling for a Second Constitutional Convention, (also called an Article V Convention) but for different reasons. For instance, beginning in the late 1970s, an effort by conservatives to require a Balanced Budget Amendment started calling for a constitutional convention to consider the matter. The campaign had the support of as many as 32 states at one time, but four states rescinded support, bringing the number today to 28. There is an ongoing, coordinated effort that targets 11 other states to come on board.

On the other side of the aisle, there is an effort to overturn the U.S. Supreme Court decision in Citizens United v. FEC via an Article V Convention. Citizens United dealt with campaign finance reform and held that restricting independent political spending by corporations was an infringement of free speech. Led by the left-wing group called Wolf PAC, right now the effort only has the support of five states, including New Jersey.

The Center on Budget and Policy Priorities, a nonpartisan think tank, stated: “To illustrate the importance of these issues, consider that if every state had one vote in the convention and the convention could approve amendments with a simple majority vote, the 26 least populous states—which contain less than 18 percent of the nation’s people—could approve an amendment for ratification.”

Proponents of an Article V Convention say that a complete re-write of the Constitution wouldn’t happen because three-fourths of states would still need to ratify any proposed revision, meaning that any extreme proposal could be blocked by just 13 states.

Still, the concern is warranted; after all, it happened once before. The Center on Budget and Policy Priorities pointed out in a 2017 report that the 1787 convention “ignored the ratification process under which it was established and created a new process, lowering the number of states needed to approve the new Constitution and removing Congress from the approval process.”

Some constitutional scholars, such as Sanford Levinson, a professor at the University of Texas Law School, believe that a constitutional convention is the only hope for any type of substantial reform and has called for a “wholesale revision of our nation’s founding document.”

Others point out that it is a different time and political climate than in 1787. An editorial in the Greensboro News & Record stated: “The first convention was guided by a presiding officer [George Washington] who put country above politics. That’s another reason why a second convention should be avoided. There is no George Washington among us today.”

So, why did the framers provide this second option? Although it is just a guess, Professor McCarty thinks the framers had to provide the constitutional convention option because they had just used it.

“Not including the option in the constitution might have gotten in the way of making the new constitution seem legitimate,” he says, which may also account for the lack of guidance in terms of the parameters or logistics of a convention.

According to Professor McCarty, the flexibility of the U.S. Constitution negates the need for an Article V Convention.

“The reason it is the oldest constitution is because it is the shortest and the most bare bones and as a result the most flexible,” he says. “The need to formally change the constitution goes away with judicial review.”

Professor McCarty doesn’t see the support for a constitutional convention.

“Given the enormity and complexity of organizing it and the uncertainties of what it would produce, a Second Constitutional Convention is extremely unlikely,” Professor McCarty says. “There are problems that could be fixed if people agreed on the solutions. But, I don’t see that happening in this current polarizing environment.”

Discussion Questions:
1. The post mentions that under the Articles of Confederation each state had its own currency. Imagine that were still the case. What advantages or disadvantages do you think it would cause?
2.  If there were to be another Constitutional Convention and the document were re-written, what amendment would you add? What amendment would you repeal? Why?
3. The Founding Fathers compromised when writing the U.S. Constitution. Do you think that same compromise would be possible today? Why or why not?
4. As an American citizen you have many rights under the U.S. Constitution. Number the following rights from 1 to 10 in order of importance to you, number 1 being most important and number 10 being the least important.  Have a conversation about why you chose to place the rights where you did.

a. Free Speech
b. Right to bear arms
c. Freedom of Religion
d. Trial by Jury
e. Freedom against unreasonable searches
f. Right to Protest
g. Right to remain silent and not incriminate yourself
h. Right to Petition the Government
i. Right a a Speedy Trial by an impartial jury of your peers
j. Right to due process of law

5. The post gives some examples of how the Articles of Confederation were deficient to the needs of the new nation. Research the Articles and list more examples. If it had not been scrapped, what problems do you think it would cause today?

Glossary Words:
nonpartisan: not adhering to any established political group or party.
overturn: to void a prior legal precedent.
ratification: approval or endorsement.
rescind: take back or cancel, repeal; to void an act or an order.