First Amendment and the Pledge of Allegiance 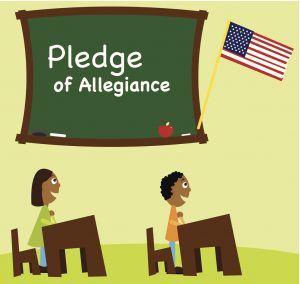 To some, reciting the Pledge of Allegiance is a sacred ritual that demonstrates American patriotism. The Pledge has been at the heart of several court rulings, however, most notably one brought by Jehovah’s Witnesses in 1935. Given that Jehovah’s Witnesses don’t vote or, as a rule, participate in civic engagement, it is ironic this religious sect would have such a profound effect on free speech (more on that later).

Backstory of the Pledge

Francis Bellamy, a former Baptist minister, wrote the Pledge of Allegiance in 1892 to celebrate the 400th anniversary of Columbus’ discovery of America. Its original incarnation—I pledge allegiance to my Flag and the Republic for which it stands, one nation, indivisible, with liberty and justice for all—would go through a few re-writes over the years. “My flag” was changed to “the flag of the United States of America” in 1924; and the words “under God” were added in 1954. The original intent of the Pledge remained the same. The plan had always been that the Pledge would be recited by schoolchildren nationwide as part of their daily exercises.

According to the Congressional Record, Rev. Bellamy explained the motivation behind the Pledge’s creation saying: “At the beginning of the nineties [that’s the 1890s] patriotism and national feeling was at a low ebb. The patriotic ardor of the Civil War was an old story…The time was ripe for a reawakening of simple Americanism and the leaders in the new movement rightly felt that patriotic education should begin in the public schools.”

A 1923 letter written by Rev. Bellamy revealed how he chose the words to the Pledge. For instance, “and to the Republic for which it stands, one Nation, indivisible” refers to the struggle of the Civil War. As for the ending, Rev. Bellamy wrote, “I had to decide whether to embody ideas of equality and fraternity. I decided against these words, and finally wrote the final, ‘with liberty and justice for all.’ That was all that any Nation could handle. It was applicable to either an individualistic or socialistic state, and could not be gainsaid by any party.”

According to Dr. John W. Baer, in his book The Pledge of Allegiance: A Revised History and Analysis, the Pledge would need to be approved by educational leaders so the words fraternity and equality could not have been used in 1892.

“’Fraternity’ was not soon to be realized or agreed on and the word ‘equality’ would be unacceptable to the State Superintendents of Education in a society that denied the vote and most civil rights to blacks and women,” Dr. Baer writes. “Thus, ‘liberty and justice’ were not controversial or debatable and plenty for one nation to try to accomplish. Bellamy felt that if ‘for all’ was added, these last two words implied the spirit of equality and fraternity.”

The new Pledge came with a salute as well, which required that the right arm be extended with the palm facing up when reciting the words “to my flag.” Many schools used the salute until World War II when it was abandoned because it resembled too closely the Nazi salute. In 1942, on its 50th anniversary, Congress officially recognized the Pledge of Allegiance and outlined in the U.S. Flag Code how it should be rendered: “by standing at attention facing the flag with the right hand over the heart.”

In 1898, New York became the first state to require that public schoolchildren recite the Pledge of Allegiance everyday. By 1935, 24 states had some form of compulsory flag law.

In 1935, Joseph Rutherford, the leader of the Jehovah’s Witnesses at the time, urged his followers to denounce compulsory flag salute laws, claiming they violated the Second Commandment of “Thou shall have no Gods before me.” Rutherford was inspired by reports coming from Nazi Germany of Jehovah’s Witnesses that had refused to offer the Nazi salute, which resulted in more than 10,000 Witnesses being sent to concentration camps.

“The Jehovah’s Witnesses considered the Pledge blasphemous in the eyes of God, a violation of the biblical injunction to worship no graven images,” Dr. Baer wrote in his book. “The Witnesses do not salute the flag of any nation on religious principles. They believe that a nation’s chief symbol, of faith and object of worship, is often wrongfully a flag and a nation.”

William Gobitas, who was 10 years old at the time, and his sister Lillian, who was 12, took Rutherford’s dictate of refusing to salute the flag to heart. As a result, both were expelled. Their father, Walter Gobitas sued the Minersville School District on their behalf. The case, Minersville School District v. Gobitis, (the family’s name was misspelled on court documents) ended up in the U.S. Supreme Court in 1940, where it was decided by an 8-1 vote that “national unity” trumped the religious rights of schoolchildren.

While extoling the country for being a “haven for religious dissenters,” Justice Felix Frankfurter, writing for the Court’s majority, claimed that the right to religious freedom was not absolute and “national unity is the basis of national security.” The Court determined that the flag was at the heart of that national unity and could be part of legislative initiatives “to promote in the minds of children who attend the common schools an attachment to the institutions of their country.”

Justice Frankfurter reasoned that the social need for conformity outweighed the Jehovah’s Witnesses claim of individual liberty and that the Pledge was secular in nature. “Conscientious scruples have not, in the course of the long struggle for religious toleration, relieved the individual from obedience to a general law not aimed at the promotion or restriction of religious beliefs,” Justice Frankfurter wrote.

In the Court’s lone dissent, Justice Harlan Stone likened the school district’s compulsory flag salute to persecution. “History teaches us that there have been but few infringements of personal liberty by the state which have not been justified, as they are here, in the name of righteousness and the public good, and few which have not been directed, as they are now, at politically helpless minorities,” Justice Stone wrote.

Consequences of the Decision

After the Court’s decision in Gobitis, there was an immediate backlash against Jehovah’s Witnesses. The Justice Department received complaints of more than 800 incidents of harassment against Witnesses over a two-year period and public schools across the country reportedly expelled more than 2,000 Witness schoolchildren. The American Civil Liberties Union reported nearly 1,500 recorded attacks on Witnesses in approximately 300 communities across the country between May and October 1940, including the burning down of one Jehovah’s Witness place of worship in Kennebunk, Maine.

“In Minersville, the reaction to the Gobitis ruling was swift and brutal. The Gobitases were jeered on the streets. His schoolmates beat William Gobitas and the local churches lead a boycott of his father’s grocery store,” according to Dr. Baer.

On June 16, 1940, U.S. Attorney General Francis Biddle took to the airwaves with a nationwide radio broadcast in an attempt to restore calm.

“Jehovah’s Witnesses have been repeatedly set upon and beaten. They had committed no crime; but the mob adjudged they had, and meted out mob punishment. The Attorney General has ordered an immediate investigation of these outrages. The people must be alert and watchful, and above all cool and sane. Since mob violence will make the government’s task infinitely more difficult, it will not be tolerated. We shall not defeat the Nazi evil by emulating its methods,” Biddle said.

Three years later, another case—West Virginia State Board of Education v. Barnette—came before the U.S. Supreme Court. This case involved Marie and Gathie Barnett (again a court clerk misspelled the family’s name) who were expelled from school when they refused, at their father’s direction, to recite the Pledge or salute the flag because of their Jehovah’s Witness upbringing.

This time the Court in a 6-3 decision ruled that compulsory flag salute laws were unconstitutional, overturning the Court’s Gobitis decision. Three of the justices, perhaps swayed by the violence against Jehovah’s Witnesses, changed their votes from the Gobitis case, plus the Court had two new justices on the bench.

In a decision released on Flag Day in 1943, the Court reasoned that the flag salute was “a form of utterance,” in other words free speech, and “a primitive but effective means of communicating ideas.” For that reason, compelling schoolchildren to recite the Pledge or salute the flag opposed the First Amendment right to free speech, which includes the right not to speak.

“If there is any fixed star in our constitutional constellation, it is that no official, high or petty, can prescribe what shall be orthodox in politics, nationalism, religion, or other matters of opinion or force citizens to confess by word or act their faith therein,” Justice Robert H. Jackson wrote in the Court’s majority opinion. “If there are any circumstances which permit an exception, they do not now occur to us. The action of the local authorities in compelling the flag salute and pledge transcends constitutional limitations on their power, and invades the sphere of intellect and spirit which it is the purpose of the First Amendment to our Constitution to reserve from all official control.”

Discussion Questions
1. What similarities do you see between the treatment of Jehovah’s Witnesses after the Gobitis decision to the treatment of minorities today? Which minorities and how are they similar?
2. For about 20 years, Americans used a salute when reciting the Pledge of Allegiance.  In the 40s, this salute was abandoned because of the close resemblance to the Nazi salute.  Words, salutes and symbols change meaning over time.  What can you think of in the Pledge, or elsewhere, that had a different meaning at one time?  Why and how did the meaning change?

Related Articles:
One Nation Under What? (Fall 2002 Legal Eagle)
Reciting the Pledge of Allegiance—Patriotic or Religious? (Legal Eagle 2015)

Glossary Words:
blasphemous: sacrilegious against God or sacred things; profane.
gainsaid: to deny, dispute or contradict.
graven image: an object of worship carved usually from wood or stone.
majority opinion: a statement written by a judge or justice that reflects the opinion reached by the majority of his or her colleagues.
overturn: in the law, to void a prior legal precedent.